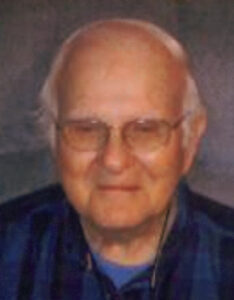 Merle Eugene Eckert, Sr., 82, passed away at 5:10 a.m. on Tuesday, Jan. 31, 2012, at his residence, 19431 W. Lincoln Way, Plymouth.
Merle was born the son of Floyd and Cora F. Reynolds Eckert on October 13, 1929. He had lived in Marshall County all of his life and graduated from LaPaz High School with the class of 1949.
On July 6, 1952, in the 1st Assembly of God Church, Merle and Melissa Marie Gaines were married. Melissa died on December 7, 2009.
Merle served in the U.S. Army during the Korean Conflict.
A hard worker, he worked at Studebakers, worked on the Ross Farms, worked for Don Andrews Feed & Grain, was employed at the Reed Fertilizer Plant in Plymouth, Champions in Bremen, McGill’s in Culver and in 1994 he retired from Bomarko in Plymouth, after 22 years of service. He had cleaned the 1st Presbyterian Church for 30 years.
Merle was interested in and collected all sorts of things. He brought home baby chicks from the Fertilizer Plant and was an avid garage sale shopper. He loved to work in his yard and he enjoyed movies, especially the old Lawrence Welk films.
His favorite phrases were “You’re a character,” and “Got to have patience.”
He loved his church, the New Vision Assembly of God..
Merle is survived by a son and three daughters. His son is Merle Eugene Eckert, Jr., Plymouth, and his daughters are Beth A. Wolf, Mentone, IN., Linda Kay Whitt, Plymouth, IN., and Cynthia Maria (Kenneth) Johnson, Jonesboro, ARK.
Five grandchildren, one great-grandchild and a brother and sister-in-law, Owen and Vivian Eckert, Bradenton, FL., survive as well.
Merle was preceded in death by his parents, his wife, a sister, Betsy Kline and two brothers, George Eckert and Delos Eckert.
Friends are invited to share memories and visit with Merle’s family from 4 to 8 p.m. on Thursday, February 2, 2012 at the Johnson-Danielson Funeral Home, 1100 N. Michigan Street, Plymouth.
Funeral services, officiated by the Rev. Lowell Ott, will be held on Friday, February 3, 2012 at 11:00 a.m. in the funeral home.
Burial will follow in the New Oakhill Cemetery in Plymouth where military honors will be accorded Merle by members of the Plymouth American Legion Post 27, Veterans of Foreign Wars Post 1162, the D.A.V and South Bend Honor Guard.
Memorial gifts in Merle’s memory may be made to the Center for Hospice Care Center.