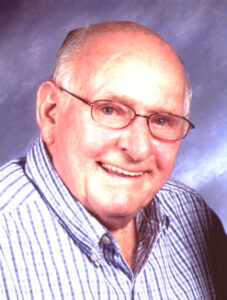 Merle J. Welch, 81, of 341 Crimson Lane, Plymouth, passed away in Miller’s Merry Manor, Plymouth, at 6:15 a.m. on Friday, July 19, 2013.
Born on December 8, 1931, in Plymouth, he was the son of Cleo A. and Margaret E. (Hurford) Welch.
He graduated from Hamlet (Oregon-Davis) High School in 1950, and served in the United States Army until 1954 and the Reserves until 1960.
On June 17, 1956, in Plymouth, he took as his bride, Carol J. Suter.
Merle’s career in the ice cream business spanned a period of 30 years. He was first a deliveryman for Schlosser Hawthorn Melody until its closing and then became owner/operator of Plymouth Dairy Ice Cream until his retirement in 1994. After retirement he remained active assisting Larry Cramer in the masonry trade over a ten year period. He had a great sense of humor and remained quick with a smile.
He was an avid fan of I.U. Basketball and St. Louis Cardinals Baseball.
Merle is survived by his wife Carol, a son, Steven M. (Patricia) Welch, Plymouth, and his two admiring grandchildren; Stephanie A. Welch of Chicago and Ryan S. Welch of Plymouth. He rarely missed their many activities through the years. Also surviving are a brother and sister: Richard (Joan) Welch and Jean Shrout, all of LaPorte, IN.
He was preceded in death by his parents, and a daughter Karen Sue Welch.
Visitation will be held on Tuesday, July 23rd from 4 – 8 p.m. in the Johnson-Danielson Funeral Home, 1100 N. Michigan St., Plymouth.
Services will be held at 11 a.m. on Wednesday, July 24th in the Plymouth Wesleyan Church, 11203 S. Michigan St., where visitation will continue one hour prior to services in the church. Pastors Oliver Dongell and Ed Friberg will officiate.
Interment with military honors provided by members of the Plymouth American Legion Post 27, Veterans of Foreign Wars – Marshall County Post 1162 and the D.A.V. will follow in New Oakhill Cemetery, Plymouth.
The family expresses their sincere thanks to the nurses of Saint Joseph VNA Home Care for their many visits.
Memorial contributions in Merle’s memory may be made to the Plymouth Wesleyan Church.