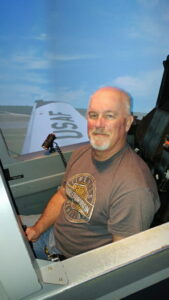 The son of Francis and Skip Davidson, preceded in death by his father Michael Dennis Quinby Sr. was born in Cedar Rapids, IA on January 7, 1959.

He was a graduate of Plymouth High School in Plymouth, IN in the class of 1977.  Upon graduating high school, he enlisted in the United States Air Force.  After obtaining the rank of Master Sergeant and serving a very honorable and distinguished career, he proudly retired from serving his country in 1997.

He received many awards and recognitions throughout his career to include: four Meritorious Service Medals, three Air Force Commendation Medals, one Air Force Achievement Medal, six Air Force Good Conduct Medals, and a National Defense Service Medal, but the award and recognition that meant the most to him was when he was awarded the Most Outstanding Civil Engineering Manager of the Year in 1991 for all Pacific Air Forces. This award recognized him as the best Noncommissioned Officer across the entire Major Command of Pacific Air Forces.

As a loving and devoted Father and Grandfather, he will be greatly missed by his sons, Michael and Brandon Quinby; daughter-in law, Kendall; grandsons, Jayden and Michael; and granddaughter, Haidyn. He was also preceded in death by his daughter, Stephanie Quinby. He is survived by his wife Rita Quinby; mother and father, Francis and Skip Davidson; brothers Kevin Nunemaker and Skip; sisters Laurie Glaub and Teressa Fiorucci-Alviz; and preceded in death by his brother Jimmy Fiorucci; Aunt Joyce and Uncle Bob Quinby. He is also survived by numerous brother-in-laws and sisters-in-law, nieces, nephews, family and friends.

To know Michael was to love Michael.  He had a vivacious love of life and joy for adventure, and he never met a stranger. His greatest loves were to be on the open road on his Harleys and camping across the United States.

Visitation will be held on Tuesday, July 26, 2022, from 3-6 pm at the Johnson-Danielson Funeral Home, 1100 N. Michigan Street, Plymouth IN 46563. Funeral services will immediately follow with Pastor Ed Friberg officiating.

Michael will have his final resting place at the Marion National Cemetery on Wednesday, July 27, 2022 with full Military Honors rendered by the U.S. Air Force.