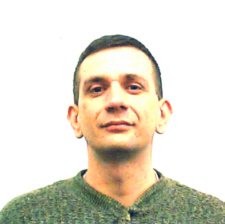 Michael DeShannon Price, 44, died Wednesday evening, November 28, 2012 at his residence in Culver.
Born on November 15, 1968 in Hobart, Mike was the son of David L. and Judith M. Wilson Price.
Mike was 1987 graduate of LaPorte High School where he was class president. He also attended Purdue-North Central, studying Liberal Arts and IUSB where he studied Culinary Arts. After swaying her with a chocolate truffle, Mike married Stephani Ullery on September 19, 2009 at the Wedding Bell Chapel in Pigeon forge, TN. Afterwards Mike prepared the full wedding dinner.
He had worked as a Professional Chef for 25 years, and was currently studying welding at the Knox SCILL Center. His friend, Chris had introduced him to welding and saw his great potential as a welder. Stephani stated “all of his food was delicious, and she never had a favorite”. He loved it when Stephani cooked for him. He had cooked Thanksgiving dinner for just the two of them, which Stephani said was the best Thanksgiving they ever had together. Mike knew his wife’s obsessions for chocolate and used his skills to carve things out of chocolate and making roses out of butter. At the age of 12, he flew to Germany, became fluent in German and loved German engineering and cars. He converted his personal car to run on bio-diesel which he made from used vegetable oil.
Mike was the most intelligent, passionate man that Stephani knew. There was nothing he couldn’t do. He was always understanding and there was nothing that they could not get through together. He never believed the News, and always did his own research before he started a debate.
He collected Corvette memorabilia and together they loved to play pool. He enjoyed politics, traveling, skiing, skeet and trap shooting, riding their Harleys, playing bass guitar and the get-aways he and Stephani enjoyed together. Mike’s true passion was making his wife happy; he would never do anything to hurt her.
Mike is survived by his wife Stephani, their furry child, Tony, his mother and father, the Suthard family of Culver and numerous aunt, uncles and cousins.
Friends may visit with Mike’s family on Saturday, December 8, 2012 from 4 to 7 p.m. in the Johnson-Danielson Funeral Home, 1100 N. Michigan Street, Plymouth.
Funeral services, officiated by the Rev. Katie Braun, will be held at 2:00 p.m. on Sunday, December 9, 2012, in the funeral home.
Burial will be in Tyner Cemetery.
Memorial contributions may be made to his family, through the funeral home.