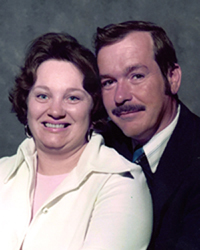 Michael J. Jeffirs, 84, passed away surrounded by love in his home at 2:30 a.m. on Thursday September 20, 2018.
A lifelong Plymouth resident, he was born in Plymouth Parkview Hospital on August 1, 1934. He was forever proud to be the son of Edmund J. and Ethel V. (McChesney) Jeffirs of Plymouth. He attended Saint Michael Academy through the eighth grade and then Lincoln High School, graduating with the class of 1952. In high school, he truly enjoyed socializing with his friends and classmates. He was president of the junior class of 1951. In 1950, Mike began working part time at Jeffirs Motor Company, his fatherâ€™s car agency. After high school graduation, he continued working there while attending the South Bend College of Commerce. In late 1953, Mike volunteered for the draft at the age 19. He served active duty from January 1954 to January 1956. Back home in 1956, he returned to work at Jeffirs Motor Company, working at every position from car washer to president for a total of 23 years.
While stationed at Fort Lewis, Washington, Mike met the loveliest person he had ever met, Beverly A. Corrigan, who was completing her junior year at Washington State College. He knew very quickly she was the one for him and set out to make that happen. On October 20, 1956, Michael and Beverly were married at St. John of the Woods Catholic Church in Tacoma, WA. They returned to Plymouth, Mike went back to work, and Bev became the bookkeeper for Jeffirs Motor Co. for the next 20 years. Bev also worked another 20 years at a local CPA firm. As for college, she graduated from Indiana University, December 31, 1984, probably the wisest person in the class.
Mike and Bev were a happy couple who had no idea they would become the parents of twelve children and the joy (and work) they would bring. Mike had promised his new in-laws he would bring Bev back to Tacoma every other year if they would do the reverse and visit Plymouth every other year. This was done for many years. The trip was made by every means of transportation possible, with the motor trips requiring a larger vehicle every time.
In early 1977, Mike decided he had seen all the cars he ever needed to see and sold the agency. Later in 1977, a retail beverage store in Walkerton became available, and Mike bought what would become M. J. Package Store, Inc. It was by all means a successful venture for the next forty years (1977-2017). Mike used to say, â€œI never had a day I didnâ€™t want to go to work.â€ As it started out, Mike would open and close the store six days a week, while Bev did the bookkeeping and was the second clerk on Saturday nights, while still working full time in Plymouth. Around 1988, the light began to shine, as the children were now turning 21 and were willing and able to help while in college or working elsewhere. M. J. Package was now a family-run business. It was good for everyone, and Mike and Bev would not have done it without them. Some were there 25 years or more. Outside the family, the store had one longtime and loved employee, Cheryl Rizek of Walkerton. In 2017, some were ready to retire, and others had demanding positions elsewhere. The store now had 10 employees, including the addition of 3 grandchildren; however, the store was sold in January of 2017, and Mike retired at the age of 82.
Mike was a life-long member of St. Michael Catholic Church. He was a three-term governor and lifetime member of the Plymouth Moose Lodge #741, a former member of the Plymouth American Legion and a current member of the Walkerton American Legion.
Mike leaves no doubt, though, that his real purpose in life was helping Bev raise their twelve children. He loved each one in a separate and special way. As adults, he loved every minute he could spend with them and theirs.
They are: Marlene M. (Rick) Minker of Hamlet, IN, Michael W. Jeffirs of Greenwood, IN; Dana L. (Brian) Corrigan of Westlake, OH; Mark E. (Carol) Jeffirs of Argos, IN; Gregory A. (Milene) Jeffirs of Plymouth, IN; Christine E. (Bob) Greig of Farmington Hills, MI; Stephen P. Jeffirs (deceased); Douglas R. (Stephanie) Jeffirs of Aurora, IL; Kent A. (Calliopi) Jeffirs of Crown Point, IN; Janis M. (Mark) Holiday of Plymouth, IN; Laura A. (Jim) Kruyer of Plymouth, IN; and Matthew W. (Katie) Jeffirs of Atlanta, GA. He is also survived by 34 grandchildren and 10-great-grandchildren; his sister, Rita L. Jeffirs of Park Forest, IL; and his sister-in-law, Marlene B. Poor of Mt. Kisco, NY.
He was preceded in death by his wife of 52 years, Beverly, his parents, his son, Stephen P. Jeffirs and his sister, Avalon Weidner Lesch.
Visitation will be from 2-7 p.m. on Thursday, September 27th, 2018 in the Johnson-Danielson Funeral Home, 1100 N. Michigan Street, Plymouth. A Rosary with be recited at 7 p.m.
Mass of Christian Burial will be on Friday, September 28th, 2018 at 11 a.m. at St. Michael Catholic Church, 611 N. Center Street, Plymouth.
Burial will follow in the New Oak Hill Cemetery, Plymouth.
Memorial contributions can be made to St. Michael Church or St. Michael School, 612 N. Walnut Street Plymouth, IN 46563, the Stephen P. Jeffirs Memorial Scholarship Fund c/o Marshall County Community Fund, or the donorâ€™s choice.