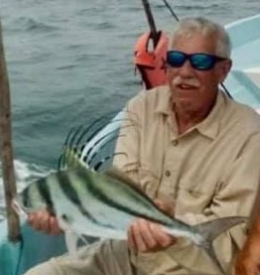 Michael L. Horvath, 72, passed away suddenly while on vacation in Puerto Vicente Guerrero, Mexico. Mike was a Tool and Die maker who worked at Ford Motor Company, Aeromet Industries and Zimmer Biomet. Then Mike lived out his dream and opened his own fireworks company, Big Bam Boom Displays. Mike and his family put on fireworks displays locally at the Culver Lake festival and at the Blueberry Festival, and also specialized in waterfront shows. They also traveled throughout the United States averaging over 150 displays on the Fourth of July weekend. Big Bam Boom was truly a family affair and Mike treasured his time teaching the craft and spending time with his loved ones.
On July 31st, 1971 Michael married M. Jane Castro in Portage, IN. On July 31st, 1996 they renewed their vows in a beautiful church service at St. Michael in Plymouth. Jane and Mike travelled the world and enjoyed family time. Mike’s other love was fishing. He loved to catch and release exotic and large fish. This passion had him traveling the world extensively, Canada, Brazil, Mexico, Africa, Costa Rica, and Belize to name a few of his favorite fishing spots. Mike is survived by his wife M. Jane Horvath; his son Kevin and his wife Lisa Horvath, and their children Brittany, Michael, and Jaime of Plymouth, IN; his daughter Brenda Wallace and her children Lamar, Dominique, and Arianna of Fredericksburg, VA; his son David and his wife Lora Horvath and their children Ainsley and Everett of Rochester, IN; three great-grandchildren; his twin sister Kathleen S. Rowe of Three Rivers, MI; and his brother Timothy and his wife Jeanette Horvath of Plymouth, IN; many other friends and family members also are left to mourn his passing. He was preceded in death by his father Louis Horvath, his mother Alma Pauline Nicholas and stepfather Paul Nicholas, and his sister Patricia Lâ€™Homme.
The family will receive friends from 4-7 p.m. on Monday, July 8, 2019 at the Johnson-Danielson Funeral Home 1100 N. Michigan Street, Plymouth. A Rosary will be recited at 6:45 p.m. A Memorial Service will follow in the funeral home at 7 p.m. with Fr. Craig Borchard officiating.
In lieu of flowers the family requests donations to St. Michael Grade School- Parish Tuition Assistance 612 N. Walnut St., Plymouth, IN 46563 or www.josewejebefoundation.org.