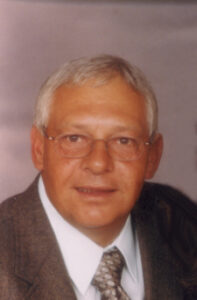 Michael Paul Haag, 57, died of natural causes at 5:36 p.m. at his residence, on Thursday, March 31, 2011.
Michael was born on May 27, 1953 in Plymouth. He was the son of Paul K. (Bud) and Betty Shafer Haag.
He graduated from Plymouth High School with the class of 1971. While in high school, he was president of the F.F.A
On September 23, 1978, in LaPorte, Indiana, Michael and Peggy Roda were married.
Mike worked for A.M. General and retired after 31 years, in 2003.
He was a lifetime Angus breeder and a member of The American Angus Association since 1965. He also served as President of the Indiana Angus Association.
Mike was a superintendent of the Marshall County 4-H Beef Association. He also served on the 4-H Fair Board.
He is survived by his wife, Peggy, Plymouth and by their two sons, Jeremy Haag, Smithville, Missouri, and Chad Haag, Plymouth.
Also surviving are his father, Paul, Plymouth, and a sister, Margaret Marie and James Berger, also of Plymouth.
His father and mother-in-law, James and Rebecca Roda of Rolling Prairie, Ind., a niece, Kim and Clint Schmitz, Leland, Ill., and two nephews, Jason and Jenny Berger and Jacob Berger, all of Plymouth, survive as well.
Mike’s mother preceded him in death.
Friends will be welcomed by the family on Monday, April 4, 2011, from 3 to 8 p.m. at the Johnson-Danielson Funeral Home, 1100 N. Michigan St., Plymouth.
Funeral services for Michael will be held at 10:30 a.m. on Tuesday, April 5, 2011, in the Johnson-Danielson Funeral Home. The Rev. Steve VanHouten, pastor of the Pine Creek Church of the Brethren, will officiate.
Burial will be in New Oakhill Cemetery, Plymouth.
Memorial gifts in Michael’s memory may be made to the Michael Haag Scholarship Fund c/o 1100 N. Michigan Street, Plymouth, IN 46563.