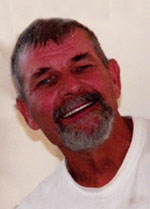 Michael R. Grubbs Sr., 64, of Jute Road in Plymouth, passed away after a sudden illness in the St. Joseph Regional Medical Center in Mishawaka on Wednesday, August 5, 2015 at 1:10 a.m. with his family by his side.
Michael was born on August 17, 1950 in Plymouth Indiana to Raymond H. Grubbs and Phyllis I. Conner Grubbs.
Mike served our country in the U.S. Army. He served as a volunteer firefighter in Bass Lake, Indiana.
He loved to go hunting and fishing with his family and friends. Mike was a Multi-World Champion Arm Wrestler. He enjoyed long Harley rides, shooting pool, mushroom hunting and loved animals. He treasured time spent with his grandkids and spending time with his family and friends.
Mike is survived by his daughters, Brandi A. (Joseph) Martin of Arizona and Kristi D. (Shilah Hawkins) Grubbs of Plymouth and son, Jerry L. Grubbs of Plymouth; father, Raymond (Georgianna) Grubs of Mentone, IN; his grandchildren, Corbin and Siarra; sister, Sherry (Tim) Lowry of Plymouth; and nieces and nephew: Josh Lowry, Angela Yanez and Tracy Boulas, all of Argos.
He was preceded in death by his mother and step-father, Bill Singleton, son Michael R. Grubbs Jr., two grandchildren, sister and brother-in-law, Linda (John) Price, and brother, Richard Grubbs.
Visitation will be from 2-6 PM on Sunday, August 9, 2015 in the Johnson-Danielson Funeral Home, 1100 N. Michigan Street, Plymouth.
Funeral services will be held at 11 a.m. on Monday, August 10, 2015 in the funeral home with Pastor Rod Ruberg of the Tippecanoe Riverview Church officiating.
Burial will be in the Oakhill Cemetery with Military Honors provided by members of the American Legion Post 27, Veterans of Foreign Wars- Marshall County Post 1162 and D.A.V.
Memorial contributions can be made to the family.