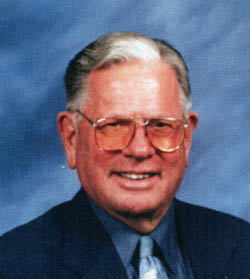 Milan J. Levett, World War II veteran, businessman, public servant, and father, died on Saturday, March 24, 2018 at Memorial Hospital in South Bend. He was 92 years old. Milan was optimistic, used common sense, and believed in the value of hard work. Along with his Christian faith, these traits were apparent in all areas of his life. Milan was born on August 30, 1925, in Allegan, Michigan, to Leo and Frieda Levett. At age 16, he bought and began farming his grandfatherâ€™s farm, having decided that having his own farm had a better future than bagging groceries at the local grocery store. Milan was the first member of his family to graduate high school. He attended a summer agricultural program at Michigan State University, which is where he met his wife of 55 years, Betty Jane Arnold. He was drafted into the U.S. Army during World War II and joined the 7th Calvalry, which was to be part of the invasion of Japan but became part of the U.S. occupation forces in Japan. After the war, through the G.I. bill, he took classes in agriculture at the Allegan Veterans Institute. Milan valued education and instilled the importance of that in his three children. He was extremely proud that all of his children and grandchildren are college graduates. Milan farmed until 1956, when he joined Allis Chalmers as a blockman for northern Indiana and moved to Plymouth, where he lived for 62 years. Milan eventually started and operated his own agricultural supply company, M. Levett Inc., for 19 years. He later was appointed as the Marshall County Highway Superintendent. He closed out his business career as the state sales representative for Great Lakes Chemical. He worked until he was 80.
Milan was an active civic volunteer and leader, with membership and leadership positions in Rotary, Freemasons, Scottish Rite, and Marshall County Historical Society. He served 10 years as an elected Republican on the County Council and was a 62-year member of the First United Methodist Church. Milan and Jane enjoyed attending their childrenâ€™s high school and college athletic events, which gave Milan the opportunity to meet new friends and share his multitude of stories and experiences. Milan never met a stranger. Milan is survived by a daughter, Sue A. (Dick) Stinson, of Plymouth, two sons, Mark A. (Marabeth) Levett of Columbus, Indiana, and Paul E. (Judy Eck) Levett of Niles, Michigan. He is also survived by six grandchildren and seven great-grandchildren. His brother, Richard Levett, also survives. His wife, Betty Jane Levett, preceded him in death. Visitation with the family will be from 10 to 11 a.m. on Friday, April 6, 2018, at the First United Methodist Church, 400 N. Michigan St, Plymouth. Memorial Services will follow at 11:00 A.M. with Rev. Toni Carmer officiating. Interment will take place immediately following at New Oak Hill Cemetery, Plymouth.
Memorial gifts in Milanâ€™s memory may be made to the First United Methodist Church, 400N. Michigan Street, Plymouth or to the Center for Hospice Care, 112 South Center Street, Plymouth. Memorial condolences may be sent to the family via www.johnson-danielson.com