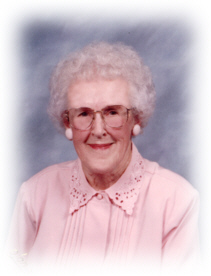 Mildred A. (Bradley) Phillips, 97, a kind and gentle person, followed the path that God had laid for her at 9:50 a.m. Thursday, October 21, 2010. A lifetime Marshall County resident, Mildred was a resident at the Pilgrim Manor Nursing Home in Plymouth where she passed after experiencing declining health the past two years.
Mildred was born on July 31, 1913, in Bremen, Indiana the daughter of Elsa Lee and Eva Ellen (Welch) Barts. The family moved to Plymouth and she graduated from Lincoln High School with the Class of 1931.
On New Years Eve of 1933 in Bremen, she became a farmer’s wife as she married Clarence L. Bradley. After nearly 34 years of marriage and raising two daughters, Clarence preceded her in death on November 9, 1967. She then became the wife of one time Marshall Co. Sherriff Harvey E. Phillips on February 16, 1974, he would pass away on July 15, 1977.
Mildred was a homemaker who helped on the farm. She became employed as a bookkeeper for General Dist. Corp in South Bend, she was a manager of ladies apparel for JC Penney in Plymouth for five years and the catalog department another six years. She also worked for Menser Industries and was a hostess for 10 years at the Chi-Am Restaurant both in Plymouth.
She was a longtime active member of the Trinity United Methodist Church, the Friendly 30 Home Extension Club, AARP Chapter and the Hospital Auxiliary for over 40 years having been awarded “2008 -Volunteer of the Year”.
Mildred enjoyed flower gardening, doing alterations, creating children’s clothes and making quilts for each of her grandchildren.
Survivors include her two daughters: Janice E. (Robert) Geddes and Sue E. (Dennis) McCrory all of Indianapolis and a step-daughter: Stephanie (Dennis) Mackey of Zionsville and step-daughter-in-law: Sally Phillips of Carmel. Ten grandchildren and nine great grandchildren also survive.
In addition to her parents and two spouses she was preceded in death by a sister: Treva Berger and infant brother: Donald W. Barts.
Visitation will be held on Saturday, October 23rd from 3 – 7 p.m. in the Johnson-Danielson Funeral Home, 1100 N. Michigan St., Plymouth.
Services will be held at 2 p.m. Sunday in the Trinity United Methodist Church, 425 S. Michigan St., Plymouth where friends may call after 1 p.m. until time of services. Pastor Kerry O’Brien will officiate. A reception will follow in the church fellowship hall.
Burial will be in the New Oakhill Cemetery, Plymouth.
Memorials may be made to the Trinity United Methodist Church.