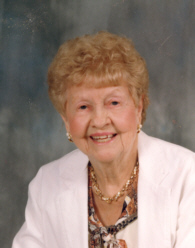 Mildred Claybaugh, 933 S. Michigan St., Plymouth, a lifetime area resident, died, following an illness, at 3:55 p.m. on Monday, July 25, 2005, in Miller’s Merry Manor, Plymouth.
Mildred was 95 years old.
She was born on September 13, 1909, in Argos, Ind., the daughter of Gilbert H. and Pearl Krouse Wallace. She attended Argos schools.
On December 24, 1927, Mildred and Glen W. Klapp were married. Glen died in June of 1955.
She married her second husband, Theodore E. Kirkpatrick, on August 18, 1962. Theodore died in 1977. Her third husband was Hayward Claybaugh. They were wed on July 20, 1978. Hayward died on September 18, 1986.
Mildred had worked at the Basket Factory and as a clerk at the City News Agency, retiring in 1974. She was a volunteer at Miller’s Merry Manor.
She loved to play euchre and was adept at crocheting. She enjoyed being outdoors and taking walks in her neighborhood.
She was a member of the Plymouth Moose Lodge and Trinity United Methodist Church.
Mildred is survived by a daughter and her spouse, Sharon and Larry Cudney, Sr., Plymouth. A grandson, Thomas Eugene Solmos and companion Sevilla Rhoades, and great-grandchildren, Steven Solmos, Amber Rhoades and David Rhoades, all of Plymouth, also survive her death.
She was preceded in death by her parents, her husbands and three sisters and a brother. They are: Emma Burkus, Eva M. Smith, Opal Harley and Eldon Garold Wallace.
Friends may gather with her family to celebrate Mildred’s life from 4 to 6 p.m. Thursday, July 28, 2005, in the Johnson-Danielson Funeral Home, 1100 N. Michigan St., Plymouth.
Funeral services will be held at 6 p.m. in the funeral home, following visitation on Thursday, July 28, 2005. The Rev. William Kaster, pastor of the Trinity United Methodist Church, will officiate.
Burial will be in New Oakhill Cemetery, Plymouth, Ind.
Memorial gifts may be made to the Trinity United Methodist Church, Plymouth, Ind.