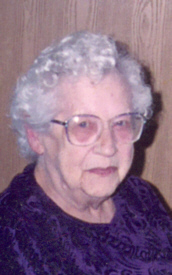 Mildred E. Thompson Books, 96, passed away Monday, March 07, 2011 at 9:18 a.m. in the St. Joseph Regional Medical Center – Plymouth due to natural causes. Mildred was a former Lawrence Lake resident now living at the River Park community.
Born January 5, 1915 in Walton, Indiana, she was the daughter of Howard Allen and Mary Edith (Lambert) Snider. The family moved to Plymouth in 1925 and although she attended school here she spent her senior year in Walton and graduated from Young America School in 1933. She was the last surviving member of her 21 classmates.
On April 5, 1934 in Warsaw, Indiana she became the bride of Robert Adam Thompson who would precede her in death on September 16, 1974.
From 1968 until 1986 Mildred was heavily involved in making jewelry from crystal glass or polished stones. For many years the couple had a booth at the Thieves Market in South Bend. Mildred showed at the Blueberry Festival for quite some time. Their children referred to them as ‘rock hounds’ as everywhere they went they were in search of that special stone to be placed in rock polisher that tumbled 24 hours a day. Mildred’s CB handle was Glass Grinder as she was known for her art of repairing damages pieces of glass.
Another interest of Mildred’s was recorded history. She was a member of D.A.R. having served as the Registrar for many years. For over five years she recorded and compiled; Marshall County Indiana Weddings 1889-1904 and Marshall County Indiana Land Records 1835-1860, these are used today as reference guides in the library of the Marshall Co. Historical Museum.
A homemaker, Mildred was a long time member of Twin Lakes Home Economics Club and attended Faith Baptist Church.
Then on December 10, 2003, after 71 years of ‘going their own way’, Mildred married her Jr./Sr. Prom date; Fremont P. Books. Together they have enjoyed a golden opportunity.
Mildred is survived by a daughter; Ellen J. (Ronald) Baney of Lakeville, a son; Jerry R. (Nina) Thompson of Tucson, AZ, two step-daughters; Candy L. (Charles) Poor of Plymouth and Cindy A. Books (Jonathon Gurland) of Englewood, FL and step-son; Glen E. (Jane) Books of Basking Ridge, NJ. Together they have 18 grandchildren and numerous great-grandchildren.
She is also survived by three sisters; Betty Jean Mitch, Joanna Dillman, Donna Mae Martin and a brother; Manford Snider and many nieces and nephews.
Preceding her in death was a daughter; Dianna Dee Wiles, a great-granddaughter; Brooke Lynn Thompson, a sister; Viola Gross, and three brothers; Paul, Donald and Verlie Snider.
Family and friends will gather at the Johnson-Danielson Funeral Home, 1100 N. Michigan St., Plymouth from 4 – 8 p.m. on Thursday, March 10, 2011. Funeral services will be conducted at 10:30 a.m. Friday in the funeral home, the Rev. Charles Krieg will preside.
Burial will follow in the New Oakhill Cemetery, Plymouth.
Preferred are memorial gifts to the American Heart Association, 208 S. LaSalle St. Suite 1500, Chicago, IL 60604.