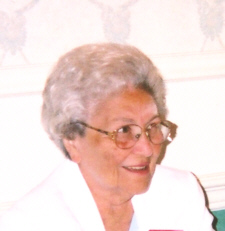 Mildred Ellen Young, 79, a lifetime area resident living on Baker St., Plymouth, died of natural causes at 11:57 a.m. on Friday, April 21, 2006, in Saint Joseph Regional Medical Center, Plymouth.
Mildred was born in Marshall County on August 5, 1926. She was the daughter of Floyd R. and Sarah Burden Roberts.
She graduated from Plymouth High School with the class of 1944.
She was first married, in Argos, to Everett Young, on April 8, 1949. Everett died on March 28, 1973.
On July 6, 1974, Mildred and Gerald L. Young were married in Roann, Indiana. Gerald died on April 25, 1989.
Mildred worked at the State Exchange Banks in Culver, LaPaz and Plymouth for several years.
One of her favorite pastimes was reading and she was an avid reader of all kinds of literature.
She was a member of the Inwood United Methodist Church.
Mildred is survived by a sister, Carol Jane Roberts of Argos, four nephews and two nieces.
They are: Dale and Janice Treesh, Plymouth; Wayne and Judy Treesh, Dalton, Georgia; Harold Treesh, Hamlet; Doris and Paul Haseley and Gerald and Deb Treesh, all of Argos and Brenda Treesh, Teegarden, Indiana.
Several great nieces and nephews survive as well.
Mildred was preceded in death by her parents, her spouses, a sister, Ruth Reaker, a nephew and a niece.
Friends will be welcomed by her family on Friday, April 28, 2006, from 4 to 8 p.m. in the Johnson-Danielson Funeral Home, 1100 N. Michigan St., Plymouth, Indiana.
Funeral services for Mildred will be held on Saturday, April 29, 2006 , at 10:30 a.m. in the funeral home. The Rev. Gail Law, pastor of the Inwood United Methodist Church, will officiate.
Burial will be in New Oakhill Cemetery, Plymouth.
Memorial gifts in Mildred’s memory may be made to the Inwood United Methodist Church.