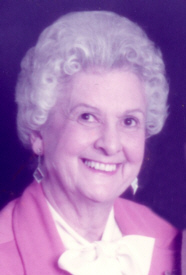 Mildred G. Dinkledine, 96, died following an extended illness, Monday December 22, 2014 at 8:45 a.m. in the St. Joseph Regional Medical Center, Plymouth.
Born in Bourbon, Indiana on November 26, 1918, Mildred was the daughter of Earl O. and Lena (Myers) Logan. She graduated from Bourbon High School with the class of 1936.
On May 24, 1941, in Tyner, Indiana, Mildred took as her husband for 61 years, Loren M. Dinkledine. Always together, they were involved in both their children and grandchildren’s many activities. He would precede her in death on August 28, 2002.
Mildred and Loren owned Dinkledine Masonry Construction Co. of Plymouth from 1950 – 1987. Mildred worked in the Marshall County Courthouse for over 25 years in the Recorder’s Office, the Auditor’s office and the Clerk’s Office. She loved taking care of her children and many grandchildren, and cooking and making memories with her family. She also liked to embroider, crochet and work in her garden.
Survivors include her two daughters; Leila Emmons and Lorna (Ernest) Zartman all of Plymouth. Five grandchildren; Doug (Suann) Emmons serving in the U.S. Army, Fort Knox, KY; Debbie Emmons of Plymouth, Michael (Kristine) Zartman of Plymouth, Daryl (Beth) Zartman of Kalamazoo, MI and Lana Hostrawser of Plymouth. Sixteen great grandchildren and 3 great-great grandchildren also survive.
She was preceded in death by her parents, husband Loren, sisters Evelyn House and Wilma Chandler, brother Fred Logan, and grandson Dennis Emmons Jr.
Visitation will be held on Monday, December 29 from 11-1 p.m. in the Johnson-Danielson Funeral Home, 1100 N. Michigan St. Plymouth, where services will immediately follow at 1p.m., with Pastor Brian Baughman officiating. Burial will follow in the Fairmont Cemetery, Plymouth.
Memorial contributions can be made to Ancilla College P.O. Box 1, Donaldson, IN 46513 for the Dennis Emmons Scholarship Fund.