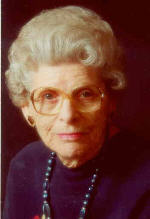 Mildred Marie Haines, 81, a resident of Grace Village at Winona Lake, Indiana, the past nine months, died at 4:20 a.m. Saturday, March 30, 2002 . Her death came unexpected due to natural causes as she was currently a patient at Miller’s Merry Manor, Warsaw . Mildred was a former resident of Shady Rest Home, Plymouth and lived most of her life in the Plymouth/Tyner area having spent many winters in Avon Park , Florida .
She was born the daughter of Dow Bliss and Rose Marie Reaume McGowan on June 8, 1920 at home in Stillwell , Indiana in LaPorte County . She attended Linkville and LaPaz Indiana schools.
On July 26, 1940 , in Tyner, Mildred became the bride of John L. Haines, he preceded her in death on April 23, 1996 .
Mildred was a homemaker and was employed as a cook for the Tyner School System many years and then the Welco Truck Stop at Walkerton. She was an easy going person and while a resident of Shady Rest learned to quilt. She also enjoyed the game of Uno and outings throughout Marshall County with other residents of Shady Rest.
She is survived by her two sons; Larry D. and Judy Haines of Walls, Mississippi and Robert Dale Haines of Avon Park , Florida . Ten grandchildren and several great grandchildren also survive along with two sisters; Flora M. Haines of Plymouth and Gladys H. Pickerl of Bourbon and numerous nieces and nephews.
Mildred was preceded in death by her husband and two brothers; Edward and Floyd McGowan.
Friends may visit with the family Monday, April 1, 2002 from 4 – 7 p.m. in the Johnson-Danielson Funeral Home, 1100 N. Michigan St. Plymouth where services will be conducted by the Rev. Charles Krieg at 2:30 p.m. Tuesday. Burial will follow in the Maple Grove Cemetery , Argos . Memorial gifts in Mildred’s memory may be made to the American Heart Assoc.