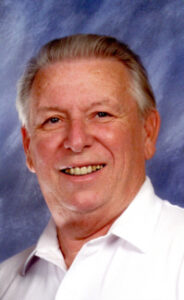 Miles S. “Steve” Perschbacher, entered into the presence of his Lord and Savior Wednesday evening February 25th at the age of 73, following and extended illness. Steve passed away in the loving care of his family and the Elkhart Hospice House.
Steve was born the only child of Miles S. and Lela F. (Kaufman) Perschbacher in Plymouth on January 24, 1942.
He became a graduate of Plymouth High School in 1960 and then attended Marion College.
Steve then met the love of his life, Janet E. Baughman and took her as his bride on April 26, 1969 in the Taber Church near North Liberty, Indiana.
Steve and his family have received spiritual support and guidance through New Song Community Church in Plymouth.
He was self-employed and since 1980 operated Northern Indiana Cash Register Co. which became Northern Indiana Hamco and is yet family owned and operated. Steve was known for his service and great work ethic and retired from the operations in fall of 2008.
Steve had also served Plymouth as a volunteer fireman for five years. He was a member of the Plymouth Moose Family Center, enjoyed golf, visits to LasVegas, NASCAR and various sports.
Surviving is his wife Jan, son Andy and spouse Sarah Perschbacher of Plymouth with children, Miles and Victoria and daughter Julie and spouse Dale Pritchard of Plymouth with children, Evan, Karys and Dori. He was preceded in death by his parents.
Family and friends will gather to celebrate his life on Monday, March 2nd from 4:30 – 6 p.m. in the New Song Community Church, 410 N. Kingston Avenue, Plymouth, where services will begin at 6 p.m. with Pastor Justin Chambers officiating.
Preferred are memorial gifts to the Center for Hospice Care, 112 S. Center St., Plymouth, IN 46563.