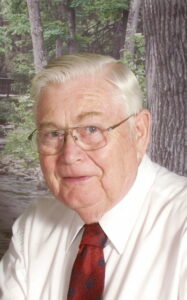 Milne (Bill) Rundle was born in Caldwell, Wisconsin on June 14, 1933 to Lawrence and Evelyn (Blakeman) Rundle. He grew up mostly in Racine County. He left school at sixteen and worked on a farm in Northern Wisconsin. He took various jobs supporting himself before finally moving back to Racine. Bill started work in the tool room of Modine Manufacturing and was offered an apprenticeship in tool and die. He attended school and received college credits in several math and job-related classes. After five years, he received his Journeyman status. During this time, he met Beverly Hesebeck, and they married in 1955. He continued in the tool and die trade for several years. Bill was promoted as the Process Engineer for corporate for 23 years. He did a lot of travelling during this time, and five out of the six children were born during those years in Wisconsin.

Bill’s love for God was foremost in his life. In his testimony a few weeks ago, he said how at nine years old, the second World War was raging and he was scared. He said the fear of the Lord was born in his heart and drove him to ask Albert Gravel if he could profess to serve God. As he grew older, he learned to love God. At the last convention he was able to attend in 2018, his testimony was: “More of the past is behind me than the future I have left. I don’t want to dwell on the past, but I am grateful for what God has brought me through. Sometimes I didn’t realize that God was helping me, but I’m so glad for his presence throughout it all. I love this way and the people in it more and more each day.

He is survived by his wife Beverly of 66 years of Plymouth; children: Melanie (Dave) White of Evansville; Barbara (Steven) Hampton of Scottsdale, Ariz.; Meredith (James) Kelbert of Port Charlotte, Fla.; Beth (Jerry) Johnson of Colorado Springs, Colo.; Allen (Sharla) Rundle of Clinton, Tenn.; Jonathan (Alyssa) Rundle of Avon; 12 grandchildren; eight great-grandchildren with one on the way; as well as several nieces and nephews.
Bill was preceded in death by his parents and his three sisters.
Visitation will be held on Friday, Nov. 5, from 4-7 p.m. at the Johnson-Danielson Funeral Home, 1100 N. Michigan Street, Plymouth.
Funeral services will be held at 11 a.m. on Saturday, Nov. 6, in the funeral home with Ministers Kenion Coleman and Kevin Nailleaux officiating.
Burial will take place in the New Oak Hill Cemetery, Plymouth.
Memorial contributions can be made to the Center for Hospice Care, 112 S. Center St C. Plymouth, Ind. 46563.

Please click the link below to live-stream the funeral service on Saturday, November 6th at 11:00am:

Memorial contributions can be made to the Center for Hospice Care, 112 S. Center St C. Plymouth, IN 46563.