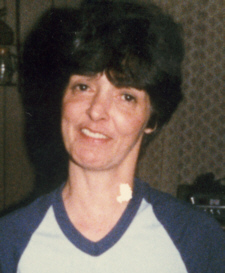 Mona M. Stetler, 66, a lifetime Plymouth resident, passed away in St. Joseph Regional Medical Center, Plymouth at 4:15 p.m. on Wednesday, June 20, 2012.
The daughter of Dean B. and Cecilia Kinzie Dipert, Mona was born on September 9, 1945 in Plymouth. She attended Plymouth Schools.
On January 26, 1986, in Inwood, Mona and Pete Stetler were married. Pete preceded her in death on December 1, 2002.
Mona had been a production worker at Aker Plastics for six and one half years.
She enjoyed being outdoors, watching old programs on television , especially ” I Love Lucy”, and listening to “Elvis Presly” music.
Mona is survived by four daughters: Deana M. (Mark) Shields of Pope, Michigan, Laurie G. Landaw of South Bend, Amy J. (Steve) Stricklend of Caladonia, Michigan, Jennifer M. (companion Jack Tygart) Gaines of Plymouth; one son: Joe M. (companion Martha Green) of Union Mills; 13 grandchildren and three great grandchildren.
Also surviving are two sisters: Sondra Kemp of Plymouth, Mary Dipert of Argos and a brother, Michael Bernero of Plymouth.
Her parents, husband, Pete and a son Markus R. Shireman preceded her in death.
Friends may visit with Mona’s family from 3 to 5 p.m. on Sunday, June 24, 2012, in the Johnson-Danielson Funeral Home, 1100 N. Michigan St., Plymouth.
Funeral services will follow visitation at 5:00 p.m. on Sunday, in the funeral home.
Burial will be in New Oakhill Cemetery, Plymouth.
Memorial contributions in Mona’s memory may be made to a charity of the donor’s choice.