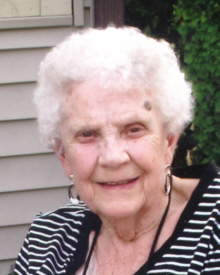 Mona R. Bryan, 84, formerly of Argos, passed away in Miller’s Merry Manor, Plymouth, at 6:30 PM on Thursday, January 31, 2013.
Born in Dana, Indiana on July 3, 1928, she was the daughter of Elver Roy and Julia Kay (Hunt) Newlin.
She attended schools in Newport, Indiana, finishing the 10th grade in the Newport High School in 1944.
Mona was married to Wallace Eugene Bryan.
Devoted to her family and friends, they were the crux of her life. She will be sorely missed by them all.
She enjoyed playing euchre and going out to eat. She loved shopping at Wal-Mart and always looked forward to the holidays with her family.
Mona loved feeding the ducks at the pond and enjoyed listening to country music.
She collected porcelain dolls from different states.
Retired from Monsanto at Ligonier, she also worked part time for ten years as a greeter at Wal-Mart.
Mona is survived by her loving family of four daughters and two sons. Her daughters are: Shirley (Larry) Crow, Elkhart: Karen (Jim) Hollar of Argos,: Karma (Randy) Murray, Plymouth: Judy (Doug) Hurford, Plymouth.
Her sons are John Bryan, Walkerton and David Bryan, LaPaz.
Thirteen grandchildren, twenty-two great-grandchildren and four siblings survive as well. Her siblings are Ed Newlin, Illinois: Jack Newlin, Texas, David Newlin, IN. and Peggy Binney, Fl.
Mona is preceded in death by her parents, her former husband and five siblings. They are: Max, Dale, Bob, Maynard Newlin and Jean Hamilton.
Visitation will be on Sunday, February 3rd from 3 – 6 p.m. in the Johnson-Danielson Funeral Home, 1100 N. Michigan St., Plymouth. Services will be held at 6 p.m. in the funeral home with the Rev. Mike Dixon officiating. Mona’s family would like to thank the staff at Miller’s Merry Manor and the folks at the Hospice Palliative Care Center for their wonderful care and kindness shown to their mother. Memorials in her name may be made to Center for Hospice Care 112 S. Center St. Plymouth IN 46563.