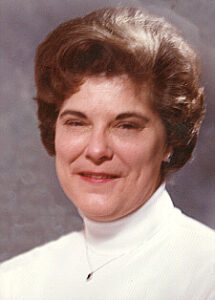 Myra Caban, 68, passed into the arms of her Savior at 7:55 a.m. Monday, March 5, 2007. A devoted mother and grandmother, Myra remained at home in the loving care and company of her family and the Marshall County Hospice.
Myra was born on November 23, 1938 in Milwaukee, Wisconsin the daughter of Herbert and Lucille (Schneider) Langnes and graduated from High School in 1956. On July 14th of that same year she married a charming Manuel Caban and together they enjoyed twenty-eight years of seeing their family grow. Manuel preceded Myra in death on April 21, 1984.
In 1967 the family moved to Plymouth and Myra took a job with Menser Industries where she served as an expert seamstress for the next 11 years. She then became employed by DelMonte Foods in production until a disability struck in 1988.
Myra loved to sew, especially little girl’s frilly dresses. She was also an accomplished quilt maker and has provided countless keepsakes for members of her family. She truly enjoyed an abiding relationship as a grandmother and great-grandmother. A good night of BINGO was never discouraged.
She was a member of the New Hope Baptist Church of Knox and a former member of the Plymouth Women of the Moose #1355 and the American Legion Aux. of Overland Park, Kansas.
Survivors include her seven children; daughters: Kimberly Langnes of Milwaukee, Wis., Diana Caban of Lawrenceburg, Ind., Laura Caban of Plymouth and sons: Manuel (Jill) Caban, Jr. of Plymouth, Emilio Caban of Chicago, Luis (Tawny) Caban of Angola and Roberto (Jennifer) Caban of Plymouth including ten grandchildren and eleven great-grandchildren.
Her surviving brothers are: Robert Langnes of Norton, Vir., James Langnes of Milwaukee, Wis and sisters: Sandy (Donald) Peterson of Menominee Falls, Wis., Judy (Rubin) Showalter of Milwaukee, Karen (Lenny) Hereck of Racine, Wis. and Phyllis (Darwood) Olson of Park Falls, Wis.
She was preceded in death by her spouse, parents, sisters: Shirley Krieser, Virginia Millard, Lucy Devine and brothers: William, Herbert Jr. and Harold Langnes.
Family and friends are invited to pay tribute on Wednesday, March 7, 2007 from 4 – 8 p.m. in the Johnson-Danielson Funeral Home, 1100 N. Michigan St. Plymouth where calling will continue after 7 a.m. on Thursday until time of services at 1 p.m. Services in the funeral home will be conducted by Rev. Tom Padberg, Chaplain of the Center for Hospice and Palliative Care.
Burial will follow in the New Oakhill Cemetery. Preferred are memorial gifts to the Center for Hospice and Palliative Care, 112 S. Center St. Plymouth, Indiana 46563