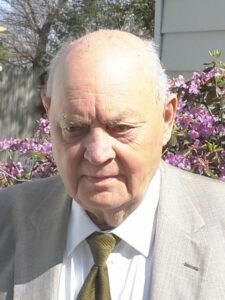 Born on March 15, 1932 in Crumstown, Indiana, Myron was the son of Russell and Sarah (Pavey) Whittaker. He graduated from LaPaz High School with the class of 1950.

In the former downtown Plymouth Church of the Brethren on Easter Sunday on April 13, 1952, Myron took as his wife Donna M. Brundage. They would share 58 wonderful years of milestones and memories.

He proudly served in the U.S. Army until his Honorable Discharge in 1955.

Myron was a member of the Local Teamsters Local 364, having logged several million miles in his truck driving career. In his words, he hauled “everything but mail”. He would retire in 1992, but he seemed to make himself even busier than during his working career.

He was a member of the Plymouth Church of the Brethren. Myron also served as the Boy Scouts leader for Plymouth Area Troop 271 and 257.

Burial will be in the New Oak Hill Cemetery, Plymouth with Military Honors.