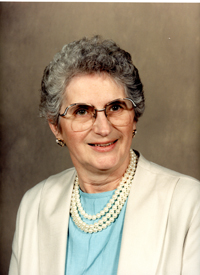 Nadine M. Zahm, 88, passed away with family at her bedside at 10:30 p.m. on Monday, September 10, 2018. Born in Plymouth, Indiana on May 29, 1930, Nadine was the daughter of Jerome M. Houin and Etheltrida M. (Fox) Houin. She received her elementary education a St. Michaelâ€™s and graduated from Lincoln High School in 1948 and lived most of her life in Marshall County.
In Plymouth, Nadine was first married to Robert E. Zahm on September 3, 1949 and made LaPaz their first home. She helped Robert farm their land for many years, mostly in Bourbon. After 35 years of shared memories, he died on October 28, 1984.
Nadine was blessed in the company of two additional spouses who preceded her in death: Robert E. Husted and James Landis. She is survived by her husband Loren R. Rensberger whom she married on October 18, 2014.
Nadine worked at Associates Investment Company in South Bend, Bourbon Elementary School, Plymouth High School and the Koala Center in Plymouth until her retirement in 1999.
She was a member of St. Michaelâ€™s Catholic Church, St. Michaelâ€™s Altar Rosary Society and was active in Harvest House. Her surviving family members include three siblings: Mrs. Charles â€œLucilleâ€ Hazen of South Bend, Mrs. Edwin â€œEleanorâ€ DeSchepper of Bremen, Donald L. Houin of Argos and a host of nieces and nephews. Her four children: Mrs. Robert â€œSharonâ€ Luebcke of Edwardsburg, MI, Mrs. Sally Zahm and husband Jamie Oxley of Plymouth, Mark R. and wife Lisetta Zahm of South Bend and Matthew H. and wife Bobbie Zahm of Argos along with nine grandchildren and four great-grandchildren. Her step-son: Dennis and wife Donita Rensberger of Syracuse, IN and daughter-in-law Vicki Rensberger of Plymouth along with four grandchildren and eleven great-grandchildren. Nadine will be remembered by all for her sweet demeanor.
Nadine was preceded in death by her parents, spouses, two sisters: Mrs. Richard â€œPatriciaâ€ Pentelow, and Mrs. Virgil â€œMargaretâ€ Faulstich, a sister-in-law Frances Houin and step-son Daniel Rensberger.
Visitation will be held on Friday, September 14th in the Johnson-Danielson Funeral Home, 1100 N. Michigan St., Plymouth from 5 â€“ 8 p.m. with a rosary prayed at 7:30 p.m. Visitation will continue after 10 a.m. on Saturday, September 15th in the St. Michael Catholic Church, 611 N. Center St., Plymouth. Mass of Christian Burial will begin at 11 a.m. with Pastor Fr. John Korcsmar as the celebrant.
Burial will follow in the New Oak Hill Cemetery, Plymouth. A reception will follow at the Knights of Columbus Hall.
Memorial gifts may be made to St. Michael Catholic Church, 612 N. Walnut Street, Plymouth, IN 46563 or Center for Hospice Care, 112 S. Center St., Plymouth, IN 46563