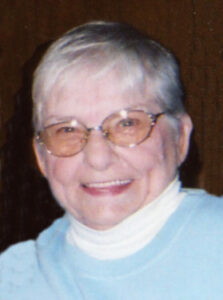 Nancy R. Popham, 80, passed away at her Hillcrest Garden Court home at 10:30 a.m. on Monday, December 7, 2015 following a two year battle with cancer. Nancy formerly resided in Argos and Oak Lawn, IL.
Born on November 6, 1935 in Chicago, IL, Nancy Rae Popham was the daughter of George Monroe and Laverne Frances (Blake) Werntz. She attended school at Chicago Loretto Academy in the Woodlawn neighborhood.
On August 2, 1952, Nancy would become the beautiful bride of Gerald L. “Jerry” Popham in St. Felicitas Roman Catholic Church in Chicago. They enjoyed 58 wonderful years together while raising a family of five children. Jerry would precede her in death on May 6, 2010.
Nancy would enter the work force in Chicago at the Kroger Co., then for Dealer Transit and finally for Coca-Cola as an office clerk. Her talents were realized in creating crafts of all kinds, including the popular cement geese and animal clothes. She would have booths in Chicago, Nappanee, Rochester and Toto always greeting shopper with a big smile and pleasant presence that just came natural for her. Nancy also enjoyed playing the organ in her home that was recently inherited by her granddaughter Kimberly to play in her memory.
Prior to moving to Plymouth, Nancy was active in Altar Rosary at St. Gerald Catholic Church in Oak Lawn. Nancy and Jerry then became members of St. Michael Catholic Church in Plymouth.
Nancy is survived by her children: Gerald R. (Jan) Popham of FL, Barbara A. (Tim) Berg of Plymouth, Mary T. (Sean) Donohoe of Demotte, IN, Sandra L. (David) Zad of NC, and Laverne M. (Peter) Visvardis of IL. Ten grandchildren and 15 ½ great-grandchildren survive, as well as her sister, Barbara Youpel of Plymouth.
She was preceded in death by her husband and parents.
Visitation will be held on Wednesday December 9th from 5 – 7 p.m. in the Johnson-Danielson Funeral Home, 1100 N. Michigan Street, Plymouth, IN 46563. A Rosary will be recited at 7 p.m.
Mass of Christian Burial will be Thursday, December 10th at 11 a.m. in the St. Michael Catholic Church, 613 N. Center Street, Plymouth where calling will continue from 10 – 11 a.m.
Burial will be in the St. Michael Catholic Cemetery in Plymouth.
Preferred are memorial gifts to St. Michael Catholic Church, 612 N. Walnut Street, Plymouth, IN 46563 or Center for Hospice Care 112 S. Center St. Plymouth IN 46563.