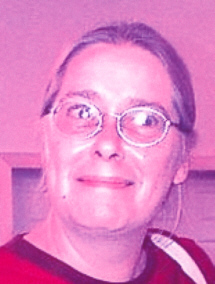 Nancy Sue Spiek, 12447 Peach Road, died in Saint Joseph Regional Medical Center, South Bend, at 12:10 p.m. on Friday, November 3, 2006
Only 57-years-old, Nancy died after a long battle with cancer.
As she wished, memorial gifts in her memory may be sent to the American Cancer Society.
Nancy was born in Plymouth on October 27, 1949. She was the daughter of Charles and Evalena Howard Barcus.
She graduated from Plymouth High School with the class of 1968.
On January 1, 1974, in Plymouth, Nancy married William Spiek .William died in February of 1988. On September 19, 1997, in Plymouth, she and Stephen Johnson were married.
Nancy worked for 22 years for Aker Plastics.
She was very skilled with her hands and did wonderfully well with crafts and arts. She was good with crocheting and she enjoyed listening to music –especially country music. She also had fun mowing her lawn on the riding lawn mower.
She loved her family and her dog, a Peekapoo named Minnie. Nancy will be missed and mourned by them all.
She was a former member of the Plymouth Moose Lodge.
Nancy is survived by her husband, Stephen, and by her daughter, Elizabeth and her husband, Cary Causey, of Culver, and by a son and his wife, James and Rachael Spiek of Plymouth.
Two step-children, Stephen Johnson, Bremen, and Lacey Johnson, Indianapolis, also survive along with three grandchildren: Valerie and Michael Berger, James Causey and Lacey White, all of Culver, and a great-grandson, Axton Kephart, also of Culver.
Her mother, Evalena Barcus, also survives her death together with three brothers and six sisters. Her brothers are: Ed and Lenda Barcus, Plymouth: James and Maryann Barcus of Algonquin, Florida: Robert and Darlene Barcus of Argos. Her sisters are: Ruth and Jack Shorter, Laura and Harold Stiles, Sharon and Dale Kamp, Sandra and Don Davenport and Jean and Bob Rees, all of Plymouth, and Linda and Phil Keller of Argos, Indiana.
She is also survived by a sister – in – law, Elaine Barcus Nancy was preceded in death by her father, her first husband, a brother and Paul Barcus and a sister, Betty Lawson, all of Plymouth.
The family will welcome friends at the Johnson-Danielson Funeral Home, 1100 N. Michigan St., Plymouth, from 4 to 8 p.m. on Tuesday, November 7, 2006. There will also be a continued time of sharing on Wednesday, November 8, 2006 from 7:00 am until the time of service. Nancy has asked that her friends and family be comfortable and casually dressed for visitation and services.
Funeral services will be held in the funeral home on Wednesday, November 8, 2006, at 11 a.m. The Rev. Gary Clemons of the Living Water Christian Church, Knox, Indiana, will officiate.
Burial in New Oakhill Cemetery, Plymouth, will take place at a later date.