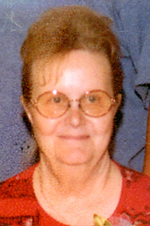 Naomi E. (Mrs. Eugene) Stewart, 87, of Plymouth, passed away Wednesday morning in the Millerâ€™s Merry Manor.
She was born the daughter of Arch & Florence (Drake) Egnor on August 16, 1930 in Morgan, West Virginia. There she received her education. On August 16, 1946 in Chelen, WV, she became the bride of Eugene M. Stewart. He would precede her in death on March 31, 2004. The family moved to Plymouth from Chicago in 1964 and for many years they worshipped at the House of Prayer â€“ United Pentecostal Church.
She worked as a housekeeper for seven years at the Garden Court East and was a volunteer for The Center for Hospice.
Naomi is survived by her children: James (Sharon) Stewart of Plymouth, Patricia (Raymond) Harness of Plymouth, Mary Hostetler of Plymouth, Grace Stewart of Culver, Carl Stewart of Plymouth, Betty (Doug) Whiteman of Plymouth, Ellen (Bryan) Brown of Walkerton, Candy (Mike) Shufelt of Plymouth and Samantha Stewart of Culver. There are 26 grandchildren, 58 great grandchildren and 11 great-great grandchildren. Betty Stewart a daughter-in-law of Dyersburg, Tenn. also survives with multiple nieces and nephews.
She was preceded in death by three sons: Eugene M. Stewart Jr., Kenneth Wayne Stewart and Allen Stewart, as well as two grandsons: Michael Stewart and Carl Stewart and one great grandson Tyler J. Mattix, a brother James Egnor and a sister Opal Secrist.
Visitation will be held Friday, August 25th from 11 â€“ 1 p.m. in the Plymouth Wesleyan Church, 11203 S. Michigan St., Plymouth where services will follow at 1 p.m. led by Rev. Ed Friberg
Burial will be in the New Oakhill Cemetery, Plymouth.
Memorial gifts may be made to The Center for Hospice Care, 112 S. Center St., Plymouth, IN 46563 or Millerâ€™s Merry Manor â€“ Activities Class, 635 Oakhill Ave., Plymouth, IN 46563.