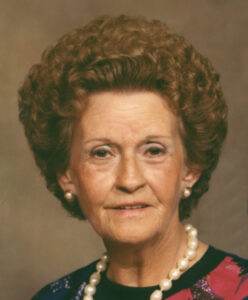 Naomi R. Richards, age 87 of Plymouth, passed away at 10:13 a.m. Tuesday, January 1, 2013 at St. Joseph Regional Medical Center- Plymouth Campus. Naomi was born on December 2, 1925 in West Union, WVA to Richard and Myrtle Nickleson Thompson. She married James A. Richards on September 6, 1941 in Salem, WVA.
Naomi was a homemaker most of her life, but also worked as a nursing home cook and as a Sunday School Teacher in Ohio. She was an excellent cook, baking the best pies. She also enjoyed doing crossword puzzles, putting together puzzles, and knitting.
Naomi is survived by her four children: Donald (Linda) Richards of Franklin, OH and their children, Mary Ruth Short, Jerry Allen and Michael Ray Richards; Sandra (Bob) Holland of Plymouth, IN and their children, Scott and Randy Holland; Deborah Boese of Cape Coral, FL and her children, Melissa Taveras and Melanie Boese; and James (Phyllis) Richards of Plymouth, IN; and 11 great-grandchildren.
She was preceded in death by her parents and husband, James in 1996.
The family will receive friends at the Johnson-Danielson Funeral Home, 1100 N. Michigan Street, Plymouth on Friday, January 4, 2013 from 12:00 p.m. to 2:00 p.m. Funeral services officiated by Life Celebrant Roberta Norris, will be held immediately following visitation at 2:00 p.m. in the funeral home. Burial will in New Oakhill Cemetery, Plymouth.