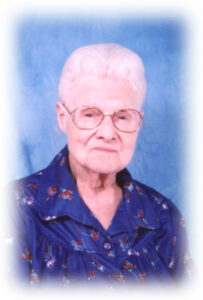 Naomi Ruth Crow, 91 of 10939 Michigan Road, Plymouth, passed into eternal life at 2:25 p.m. Friday, July 20, 2007. Naomi died as she had wished in her home for the past 56 years, in the care of her family and the Marshall County Hospice.
She was born the fifth of nine children to Nathan and Cleo Elizabeth (Beam) Pletcher, on May 30, 1916 in Lakeville, Indiana.
Naomi began her education at the Culp School near Nappanee and then attended Argos High School.
On January 1, 1939 in Akron, Indiana, she became the bride of Lewis S. Crow and together they enjoyed 44 years together. He would precede her in death on July 10, 1983.
She was a dedicated production employee for over 25 years with Pilgrim Farms of Plymouth until retiring on July 31, 1981.
Living a Christian life and giving testament to others, she was a longtime active member of the Plymouth Church of God having served as church pianist until the age of 89. She was also involved in the Right to Life and the Home & Hobby Extension Homemakers Club. At home she enjoyed reading and tending her flower and vegetable garden.
She was an attentive mother of two daughters, a son, eleven grandchildren and their families: daughter, Lucille R. and husband John R. Miller Sr. of Owosso, Michigan with children; John R. Miller Jr., Karen S. Miller, Paula R. Miller, Pamela K. Miller and Carol A. Miller. Daughter Sandra E. Feece of Plymouth survives with children; Christopher L. Feece, Todd E. Feece and Michelle D. Feece. A son Raymond Crow preceded Naomi in death and is survived by his wife Barbara of Montgomery, Illinois and children; Julie A. Sullivan, Hans N. Crow and Heidi Dettloff. Also included are eight great grandchildren and two step great grandchildren.
Her surviving brothers are; Russell Pletcher and Gene (Leona) Pletcher of South Bend and Willard (Ruth) Pletcher of Argos along with numerous nieces and nephews.
Naomi was preceded in death by her husband, a granddaughter; Sherri L. Miller, four brothers; Paul, Clarence, Charles and Ralph Pletcher and a sister; Goldie Barlow.
Family and friends are invited to celebrate Naomi’s life on Monday, July 23, 2007 from 3 – 8 p.m. in the Johnson-Danielson Funeral Home, 1100 N. Michigan St., Plymouth and continue after 7 a.m. Tuesday until time of services at 1 p.m. Tuesday in the funeral home. The Reverends Wayne Mikel and John R. Miller Sr. will officiate.
Burial will follow in the New Oakhill Cemetery, Plymouth.
Memorial gift contributions may be made to the Plymouth Church of God, 11734 9A Road, Plymouth, Center for Hospice and Palliative Care, 112 S. Center St., Plymouth, IN 46563 or Right to Life.