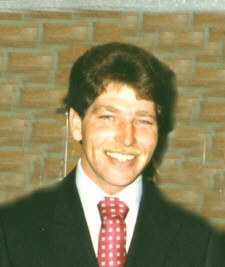 Neil Patrick Moyer, 49, a lifetime Plymouth area resident, died, following medical problems, in Parkview Hospital, Fort Wayne, Indiana, at 11:08 a.m. on Monday, March 12, 2007.
Neil was born in Plymouth, the son of Robert Lee and Luella M. Zehner Moyer, on June 26, 1957.
He graduated from Plymouth High School with the class of 1975.
He had worked as a heavy equipment operator.
Neil loved classic cars, especially of the vintage of the year he was born, 1957.
He is survived by his mother, Luella, Plymouth, and a son, Patrick Moyer, Culver, and a grandson, Jayden Moyer, Star City, Indiana.
Two sisters and two brothers also survive. They are: Yvonne and Gerald Quint and Diane Johnson, all of Plymouth. His brothers are: Jim Moyer, also of Plymouth, and Doug Moyer, Stoughton, Wisconsin.
His father, Robert, preceded Neil in death.
Friends will be welcomed by Neil’s family on Thursday, March 15, 2007, from 5 to 7 p.m. at the Johnson-Danielson Funeral Home, 1100 N. Michigan St., Plymouth.
Funeral services for Neil will be held at 10:30 a.m. on Friday, March 16, 2007, in the funeral home. The Rev. Dr. Ronald Liechty will officiate.
Burial will be in New Oakhill Cemetery, Plymouth.
Memorial gifts in Neil’s memory may be made to the American Cancer Association.