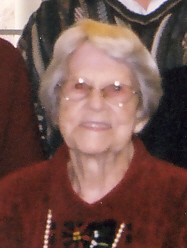 Nellie A. Hartman Siekmann, a resident of Edwardsburg, Michigan, since 1971, died of natural causes at 5:15 a.m. on Monday, May 1, 2006, in Buchanan Meadows, Buchanan, Michigan.
She was 92 years old.
Born in Berne, Indiana, on March 13, 1914, Nellie was the daughter of Edward F. and Olive O. Teeter Elliott. She attended Argos schools.
On October 12th 1932, Nellie and Ira “Rueben” Hartman were marred. Rueben died in 1968 and two years later, Nellie and Ted Siekmann were married. Ted preceded her in death in 2003.
Nellie worked first with the Culver Military Academy food service and later with the Notre Dame food service.
She enjoyed cooking and she loved to dance –especially square dances and polkas.
She was a charter member of the Buchanan Women of the Moose.
Nellie is survived by two sons and a daughter. Her daughter is Sue C. Williams of Edwardsburg, Michigan and her sons are Edward L. Hartman, Emporia, Kansas, and William D. & Clara Hartman of Buchanan, Michigan.
Nine grandchildren, 17 great-grandchildren and two great-great-grandchildren survive as well.
Her parents, her two husbands, an infant grandson and 11 brothers and sisters preceded Nellie in death.
Friends are invited to visit with the family and celebrate Nellie’s life from 11 a.m. to 1 p.m. on Thursday, May 4, 2006, in the Johnson-Danielson Funeral Home, 1100 N. Michigan St., Plymouth, Indiana.
Funeral services will follow visitation at 1 p.m. The Rev. Charles Krieg, pastor of the Salem United Methodist Church, Bremen, Indiana, will officiate.
Burial will be in New Oakhill Cemetery, Plymouth, Indiana.
Preferred are memorial gifts to the Marshall County Council on Aging, 1305 W. Harrison St., Plymouth, IN 46563.