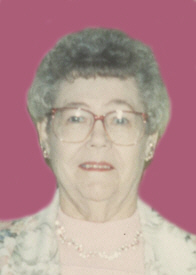 Nellie E. Long, 90, a Plymouth resident most of her life, passed away at 3:15 p.m. Thursday, March 6, 2014 at the Kindred Nursing & Rehabilitation Center, Bremen.
She was born in Sheldon, Wisconsin on September 5, 1923 to Oral G. and Anna G. Schrader Murray. She graduated from Plymouth Lincoln High School with the class of 1941.
On June 4, 1946 in Knox, Nellie married Joseph U. Long. He would precede her in death on June 19, 2008.
Nellie worked for Mecks Industry during the war on a production line. When the men came back, she lost her position. She began working for Sears in catalog sales where she would tele-type orders and sales. Before retirement she worked for JoAnn’s Dress Shop as a clerk.
She was a proud member of the VFW Post 1162 Ladies’ Auxiliary of Plymouth. Nellie served as president, went through all the chairs and also served as 3rd District Auxiliary President.
Nellie is survived by her two sons, Bill L. (Lois) Watson of Plymouth and their children: Rene (Mike), Justin (Susan) and WIlliam; and Terry J. (Teresa) Long of Argos and their children: Michael (Tah), Elizabeth (Nick), Holly, and Joseph. Also surviving are 14 great-grandchildren and 2 great-great grandchildren.
She was preceded in death by her parents and siblings, Ormer Murray, Violet Miller and Pearl Tabbott.
Visitation will be from 4 – 8 p.m. on Monday, March 10, 2014 in the Johnson-Danielson Funeral Home, 1100 N. Michigan Street, Plymouth. The VFW Post 1162 Ladies’ Auxiliary will offer a memorial service at 7:30 p.m.
Funeral services will be at 11:00 a.m. on Tuesday, March 11, 2014 in the funeral home with Rev. Chuck Krieg officiating.
Burial will be in the Oakhill Cemetery.
Memorial contributions can be made to the VFW Post 1162 Ladies’ Auxiliary of Plymouth 606 Lake Ave., Plymouth, or the VFW National Home for Children Waverly, 3573 Waverly Road, Eaton Rapids, MI 48827.