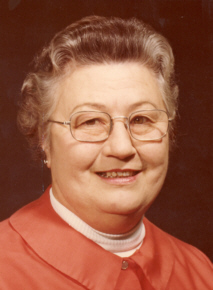 Memorial services and a time of sharing for Nellie M. Long, 86 who died in Titusville on January 14th of this year, will be held on Saturday, June 10, 2006 beginning at 11 a.m. in the Johnson-Danielson Funeral Home, 1100 N. Michigan St., Plymouth. Members of the Eastern Star Plymouth Chapter 28, will provide memorial rites followed by the Rev. Charles Krieg, pastor of the Salem United Methodist Church, Bremen. Nellie will be placed to rest next to her husband at the Oakhill Cemetery, in Plymouth. Memorial gifts may be made to a charity of the donor’s choice.
Nellie Marie Long was born in Monon, Indiana on March 3, 1919 to Joseph and Clara (Burks) Newgent.
Nellie was the one of nine children surviving infancy: Katherine, Eva Mae, James, Nellie, Wilbur, Mary, Charles, Eugene and Margaret. They also had one older half sister, Mabel. Of these siblings, Nellie is survived by her two younger sisters, Mary Putt of South Bend and Margaret Smith of Elkhart, Indiana.
Growing up, Nellie was very involved in helping with the family farm and household chores, and especially enjoyed working outdoors with her father. She and her siblings did not have many material possessions, but the stories she told impressed one with the closeness and fun they had growing up to together.
On July 23, 1937 she married Grant Frederick Long in Monticello, Indiana. Their daughter, Marilyn was born June 11, 1939. Nellie and Grant remained in Monon until the early 1960’s, where Nellie was a wife, mother and homemaker. After leaving Monon, she and her husband retired for three years to Tucson, Arizona, then later moved to Plymouth, Indiana. Grant passed away on March 4, 1970, and Nellie continued to live in Plymouth until 1987. During those years in Plymouth she worked for Dolan’s Market and Harvey Mart. After leaving Plymouth, Nellie moved to Titusville, Florida in order to be closer to her daughter and family.
Throughout her life Nellie was a very outgoing person and loved meeting people. She enjoyed cooking, baking, gardening, crocheting and knitting. She was also very proud to become a 50 year member of the Order of Eastern Star.
Although plagued for several years by arthritis, she enjoyed relatively good health until the past year when she began suffering from congestive heart failure. She was able to live alone and maintain her own home until the past year, and continued to enjoy cooking, baking and sewing for her family and friends. She was honored a few years ago by the Titusville Rotary Club for raising several hundred dollars for their scholarship fund by baking pies which the club raffled off at weekly meetings.
In addition to her two sisters, Nellie is survived by her daughter, Marilyn (Mrs. Robert Jones), six grandchildren, twelve great grandchildren, one great-great grandchild and many nieces and nephews.