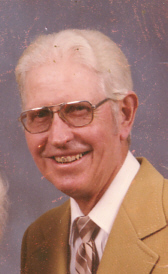 Lifetime Marshall County resident, Nelson D. Cline, 90, of 10850 U.S. 6 West, Bremen, Indiana, died at 5:28 p.m. on Tuesday, March 14, 2006, in Saint Joseph Regional Medical Center, Plymouth.
Nelson was born in Bremen, the son of Charles William and Lena Ida Wiegand Cline, on June 8th, 1915.
He graduated from LaPaz High School with the class of 1933.
On November 7, 1936, in Syracuse, Indiana, Nelson and Lura Aldene Wade were married. Lura died on April 19, 2001.
Nelson was a retired farmer. He served as past Director of the Farm Bureau, and was a former member of the House of Prayer in Plymouth.
Nelson is survived by a daughter and son-in-law, Julia R. and Rev. Greg W. Davis of DeKalb, Illinois. Two granddaughters, Dawn Davis and Haley Davis, also of DeKalb, survive as well, together with a brother and a sister, Wilfred L. and Elfreda Cline and Helen Luella Klinedinst, both of Bremen, Ind., and several nieces and nephews.
He was preceded in death by his parents and his wife, Lura.
Friends will be welcomed by the family to celebrate the life of Nelson Cline from 4 to 8 p.m. on Friday, March 17, 2006 at the Johnson-Danielson Funeral Home, 1100 N. Michigan St., Plymouth, and one hour before services Saturday, March 18, 2006 at the Walkerton Pentecostal Church, 1174 Lake St., Walkerton, where Nelson was a member.
Funeral services for Nelson, officiated by the Rev. Arnold Smith, will be held at 10:30 a.m. on Saturday, March 18, 2006, at the Church.
Burial will be in Oakhill Cemetery, Plymouth, Indiana.
Memorials to Nelson may be may to the Walkerton Pentecostal Church.