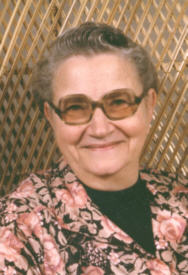 Nelta Irene Dipert, 92, a Plymouth resident for the past 63 years, passed away at 8:45 p.m. on Friday, February 15, 2013, in the Elkhart Hospice House, Elkhart, Indiana.
Born in Valentine, Indiana on February 13, 1921, she was the daughter of Charles Lloyd and Lula Elizabeth (Baugher) Thornburg.
She attended Grovertown School. She was married to Chester Wayne Dipert on January 1, 1939 in Walkerton, Indiana he would precede her in death on December 30, 1987.
In the early years of their marriage the family lived on a small farm and raised horses. She loved her family and always looked forward to everyone being at home and they looked forward to enjoying her homemade noodles.
Nelta worked at the Easy Heat Factory in Lakeville for 22 years, retiring in 1983.
Surviving is her daughter Phyllis Thornburg, Plymouth, a daughter-in-law; Sharon (James) Standley and by a sister, Mae Dipert of Walkerton. Three grandsons; Kevin (Lisa) Kersey of Plymouth, Michael (Mary Jo) Kersey of Kempner, Texas and Darrin Kersey of Plymouth survive with seven great-grandchildren; Sarah, Jason, Phillip, Kaitlyn, Cruz, Sandra and Samantha. Seven great-great-grandchildren also survive, they are; Katherine, Nicholas, Zoey, Hayley, Caleb, Taylor and Blake. Several nieces and nephews who lovingly called her “Aunt Nettie,” survive as well.
Nelta was preceded in death by her husband and a son, Marvin Dipert who was killed on July 18th, 1969 while serving his country in Vietnam. Three sisters have also died: Helen Swart, Mamie Winstead and Gladys Killian, along with a son-in-law, Eugene Thornburg.
She was a loyal and dedicated member of the Plymouth House of Prayer.
Friends and family are invited to visit and share memories on Tuesday, February 19th from 4 – 8 p.m. in the Johnson-Danielson Funeral Home, 1100 N. Michigan St., Plymouth. Funeral services for Nelta will be at the funeral home on Wednesday, February 20th at 3 p.m. Hospice Chaplain Tom Padberg will officiate.
Memorial gifts in Nelta’s memory may be given to the House of Prayer, 12450 Plymouth-Goshen Trail, Plymouth, IN 46563 or Center for Hospice Care, 112 S. Center St. Plymouth, IN 46563. Burial will be in Oakhill Cemetery, Plymouth.