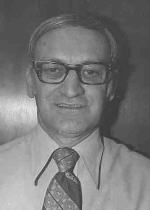 Likable and respected former manager of Yoder’s Sports Center store, Newell W. Yoder, 84, has died. Newell, a lifetime resident of this area, died, following an extended illness, at 10:20 p.m. on Saturday, August 10, 2002 , at his home, 12590 11B Rd., in the care of his family. Born in Nappanee , Ind. , on Sept. 2, 1917 , he was the son of Jesse and Mary Myers Yoder. He graduated from Plymouth High School with the class of 1935. On July 9, 1939, in Davenport, Iowa, Newell and Patricia “Pat” Hartman were married. For nine years, Newell worked as an agent out of the U.S. Census Bureau’s Chicago office. He managed the popular sporting goods store from 1970 to 1989. He was an avid reader and loved Big Band music, especially Jazz. He followed all of the Plymouth sports teams and enjoyed watching his professional teams: the Chicago Bears, Bulls and Cubs. He was an outdoorsman, appreciating nature and her creatures. He liked to fish, garden and spend time with his family. A member of the Trinity United Methodist Church, Newell was a two-term Center Township Trustee. He was a life-long member of Phi Delta Kappa and the Plymouth Moose Lodge No. 741. In the early 1970s, he helped organize the Plymouth Summer Basketball League. Newell is survived by Pat, his wife of sixty-three years, and by their four sons and two daughters. His sons are: Stephen K. and Marcia Yoder, Fishers, Ind.; Jeffrey L. and Phillip A. Yoder, both of Plymouth and James N. and Betty Yoder, Bremen. His daughters are Kristy K. and Louis Spaid, Wheatland, Wyo., and Nickie A. and Dennis Weidner, Plymouth. Nineteen grandchildren, 22 great-grandchildren and one great-great -grandson, also survive. Ward Yoder, a brother, Plymouth, and Dorothy Holland, a sister-in-law, living in Ft. Wayne, together with several nieces and nephews, survive as well. Newell was preceded in death by his parents, two grandchildren, a great-grandchild; Maynard Yoder, a brother, and Mary Jane Emond, a sister. Friends are invited to celebrate his life and share in his memory at the Johnson-Danielson Funeral Home, 1100 N. Michigan St., Plymouth, from 5 to 7 p.m. on Tuesday, August 13, 2002. A memorial service will be held on that evening at 7 p.m., following visitation at the funeral home. The Rev. Charles Krieg, pastor of the Salem United Methodist Church, Bremen, will officiate. Interment will be in Oakhill Cemetery, Plymouth. Memorial gifts may be made in Newell’s memory to a charity of the donor’s choice.