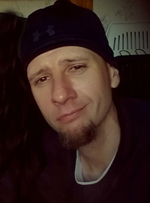 Nicholas A. Hundt, 39, passed away Tuesday morning May 1, 2018 at Memorial Hospital in South Bend.
Born in Plymouth, Indiana on February 3, 1979, Nick was the son of Kenneth A. and Sylvia â€œJoâ€ (Stayton) Hundt. He graduated from Plymouth High School with the class of 1997.
Nick was a hard worker and did many construction jobs in the Plymouth area.
Being outside is where he loved to be, whether it be fishing, canoeing, camping or riding his Harley. He was a talented artist and loved to draw. He was a self-taught guitar player and used music as his escape. Nick loved kids, and adored times spent with his nieces and nephews. He was also a cat and dog lover.
Nick is survived by his parents, Kenneth and Sylvia â€œJoâ€ Hundt, and his two sisters: Kristen (Tim) Bules and Jenny Hundt, all of Plymouth; his maternal grandmother, Norma Stayton of Plymouth; his nieces and nephews, Dylan Griewank, Madelynn Steinke and Ayden Kobold; his cousin that was like a sister, Stefanie Hundt and her children, Caleb Hundt, Haley Miller and Christian Miller.
Also surviving is his aunt, Ginger Hundt; uncles, Larry Hundt, Dave Stayton, John Stayton and Gene Stayton; and cousins, David and Danielle Stayton.
He was preceded in death by his great-great-grandparents, David and Goldie Stayton; maternal great-grandmother, Sylvia Smith; paternal grandparents, Gust Eugene and Genevieve Hundt; maternal grandfather, Dave Stayton; aunt, Karen Stayton, and his cousin that was like a brother, Jason Hundt.
Visitation will be from 4-6 PM, Friday, May 11, 2018 in the Johnson-Danielson Funeral Home, 1100 North Michigan Street, Plymouth, Indiana, 46563, with a memorial service beginning at 6:00 PM with Pastor Darek Morris officiating. Memorial contributions can be made to the family that will then be donated to Davidâ€™s Courage, a non-profit rehab center that is being formed in Plymouth.