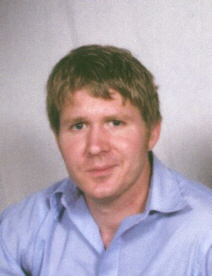 Nicholas A. Rhoads, 35, passed away in Los Angeles, California on Wednesday morning, January 16, 2013.
Nicholas was born January 4, 1978 in South Bend, Indiana to Arnold and Patricia (Buschman) Rhoads. He spent most of his life in the Plymouth area. He attended Ancilla College and Purdue University. Nick worked in the restaurant industry for several years and at various locations. There he learned to love to cook. He opened his own restaurant, Shaggy’s Diner here in Plymouth. He loved people who came in and being a part of their lives. He decided to open the diner at night for Open Mic and let fledging musicians play their music for others, helping each to find their own special audience. Of course, he loved to jam and sing with all of them.
He decided to take his music and art to California. There he built web sites, worked on a cooking show and worked for an event planner as a cook. He did commissioned art work and was building his own art portfolio, in the hopes of one day to be able to have a show as a new artist.
For his entire but short 35 years, Nick was a kind a gentle soul. He was a person with a big heart and would give someone his last dime if they needed it more than him. He loved music and his art. Nick had an artistic vision of things that were beyond our imaginations. His art work made you think and ponder as you gazed upon them, each person seeing something different. His music, he said, was his prayer and is what filled his soul. He sang with passion and feelings and each song was a story of life. He wrote some of his own music and played and sang the songs of singers and songwriters he admired. Nick’s art and music was his own life and they reflected the type of person he truly was. He has now joined his two children in heaven, Emma and Robert, and will be forever at peace.
Nick is survived by his parents, Arnold and Patricia Rhoads of Plymouth, his sister, Rachel Miller, and many aunts, uncles, cousins and friends.
He was preceded in death by his twin children, Emma and Robert; his paternal grandmother, Dorothy Rhoads; his maternal grandfather, Carl Buschman; and one aunt, Kathy Pritchett-Giles.
A Mass of Christian Burial will be held at 11:00 AM on Saturday, February 2, 2013 at St. Michael’s Catholic Church, 613 N. Center St., Plymouth. The family will receive friends after 10:00 a.m. in the church. There will be a memorial gathering Saturday afternoon at Opie’s in Plymouth at 2:30 PM, for all those who wish to come and share their music, memories and stories of Nick.
In lieu of flowers, memorial contributions can be made for Masses in Memory of Nick, Heartland Artists P.O. Box 714, Plymouth, IN 46563, Northern Indiana Service Dogs 1913-F N. Michigan Street PMB 190, Plymouth, IN 46563, or any music or art program of your choice.