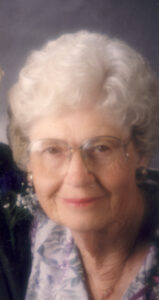 Nina C. Schafer, 95, lifetime Bremen area resident, died at 8:15 p.m. on Monday, October 4, 2010 at her residence.
Nina was born at home on August 10, 1915, the youngest of four children of Walter and Eva Kaiser Albert.
She was a 1933 graduate of LaPaz High School.
On June 24, 1939, Nina and Howard E. “Bob” Schafer were married in South Bend. They bought their farm, where Nina was still living, on October 14, 1940. Howard died on November 4, 2009.
Nina worked at Ball Band in South Bend from 1935 until 1941. She later worked at LaVille High School until her grandchildren were born, at which time she quit to spend time with them.
An avid gardener, she loved growing beautiful flowers. She attended Plymouth Missionary Church from it’s very beginning and was very active in church functions until her later years. Nina is survived by two daughters and their children: Janet Gottlieb of Hobart, Indiana and her daughters: LaVonda (Jim) Gibson of Granville, Ohio and Brenda (Jeremy) Palmer of Fishers, Indiana; Connie Ullery and her children: Richard (Dawn) Ullery and Melinda (Kyle) Hawkins, all of Bremen, Indiana: nine great grandchildren and one great-great grandson.
She was preceded in death by her parents, her husband, a sister, Mable Bosworth and an infant brother and sister.
The family will receive friends from 5 – 8 p.m. on Wednesday, October 6th in the Johnson –Danielson Funeral Home, 1100 N. Michigan St., Plymouth. Calling will continue after 9:00 a.m. until time of services at 10:00 a.m. on Thursday, October 7th in the Plymouth Missionary Church, 1350 E. Jefferson St., officiated by the Rev. Patrick Puglisi and the Rev. Charles Krieg.
Burial will follow in Bremen Cemetery.
Memorial gifts in Nina”s name may be given to the Marshall County 4-H Fair Board.
.