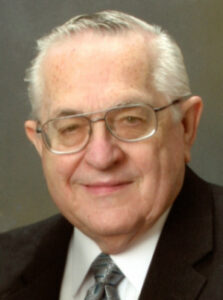 Noble L. Neidig was humbly known as a Christian, family man and industrialist. He went home to be with his Saviour at 4:30 p.m. on Sunday, March 1st. at home, in the care of his family. He was 81 years old.
He was born in Plymouth, Indiana on November 14, 1933 to Harold J. and Trella (Lemler) Neidig and was a lifetime resident.
Nobe graduated with the 1951 Class of Plymouth Lincoln High School. He furthered his studies in Business Administration at Manchester College and graduated in 1956.
He gave service to his Country in the Army National Guard from 1957 – 1963.
On March 22, 1957 in Plymouth, he joined Barbara K. Yost in the Godly bonds of Matrimony and faithfully shared the next 58 years building a family together. Nobe never lost sight of the importance of this aspect in life.
Noble, his brother Donald, and Sister-in-law , Dorothy, founded Indiana Tool & Mfg. Co. (ITAMCO), in 1955. Donald and Noble shared responsibilities, with Donald handling the sales, and Noble handling the operations. Most people referred to him as Nobe. He had a keen mind for business, and engineering. He received his bachelors degree in business education, from Manchester College, and was always known as a great teacher. He was an entrepreneur at heart and practice, and was the definition of hands-on! Nobe, embraced change, and especially technology. He was an avid Web Surfer, and used his IPhone to communicate right to the end.
He was gifted in many areas, and was always trying to learn and understand how everything worked. He was a leader in everything he touched, and his spiritual guidance in situations, set him apart from the norm. He served faithfully for 50 years as a Deacon, Sunday School teacher, Song Leader, and supporter of Christian Education locally and nationally. His family includes his loving wife Barb, four sons and their families. Gary L. & Robin of Plymouth and children; Trisha and Nathan Crawford, Joel and Lindsey Neidig, Hilary and Justin Frank and Faith Neidig. Mark A. & Debbie of Orlando and children; Mark and Jennifer Neidig, Chase and Courtney Neidig. David K. & Penny of Plymouth and children; Courtney and Carlos Marinho, Jordan Neidig ,Tyler and Rachel Puckett, and Tara Sailes. And, Daniel A. & Melissa “Noele” of Plymouth.
Thirteen great-grandchildren also survive.
Two nephews, Stephen L. & Christine Neidig of Salt Lake City and Phillip L. & Elizabeth Neidig of Laguna Hills, CA survive as well.
He was preceded in death by his parents and three brothers infant Dale, Lowell E. and Don.
The family will receive friends on Thursday, March 5th from 10 a.m. until 2 p.m. in the Grace Baptist Church, 1830 N. Michigan St., Plymouth. Services will begin at 2 p.m. with Pastor Matthew Elliott presiding.
Memorial gifts are preferred, to benefit the Grace Baptist Christian School of Plymouth, IN.
Burial will follow in the New Oakhill Cemetery, Plymouth.