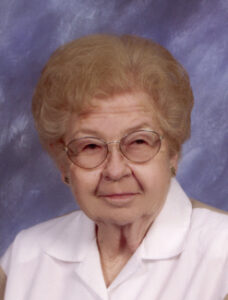 Former Plymouth resident, Nola Marie Thorne, 91, of Zephyrhills, FL died of natural causes at 6:20 a.m. in Gulfside Center for Hospice Care, Zephyrhills, on Friday, February 17, 2012.
A Godly woman Nola was loved by all of her family and friends and will be dearly missed by all. She was born in Sapulpa, Oklahoma, on October 3, 1920, the daughter of Oscar M. and Donnie Smith Patterson.
She graduated from Hammond (IN.) High School and on November 8, 1938, in Hammond, was married to Roy E. Thorne. Roy died on December 9, 1988.
Nola’s profession was as a bookkeeper in the banking business.
Left to cherish her memory is a daughter, Diane Simmons of Zephyrhills and a son-in-law, Milton Willis of Plymouth, IN.
Surviving Grandchildren are: Dawn (Scott) Newman, Culver, IN.; Christopher (Sherry) Simmons, Bremen, IN. and Rick (Lisa) Willis, Elkhart, IN.
A sister, Betty (James) Kemp, Broken Arrow, OK. Several Great-Grandchildren and numerous nieces, nephews and grand nieces and nephews survive as well.
Nola was preceded in death by her parents, her husband, a daughter, Darlene Willis, and two sisters, Iona (Arthur) Bevan and Leota (Bill) Johnston and a son-in-law, Richard Simmons.
Visitation for Nola will be held on Wednesday, February 22, 2012 from 11 to 1 p.m. in the Johnson-Danielson Funeral Home, 1100 N. Michigan St., Plymouth, IN.
Funeral services will follow the visitation and sharing of memories in the funeral home at 1 p.m.
Interment will be in Oakhill Cemetery, Plymouth.
Memorial gifts in Nola’s memory may be made to the American Cancer Society, 601 W. Edison Road, Mishawaka, IN 46544.