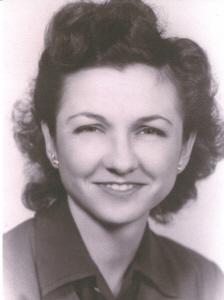 Norma B. Dillingham, 92, died at 9P.M. on Monday, January 28, 2013, in Majors Hospital, Shelbyville, Indiana.
Norma was born on February 10, 1920, in Plymouth, IN., the sixth child of Lewis (L.C.) and Delia M. Snyder Neidlinger. She grew up on a 20-acre farm on Lake Ave.
Norma graduated from Plymouth’s Washington High School with the class of 1937, and worked for a year in the Recorder’s office at the Marshall County Courthouse.
She met Keith Dillingham, five years her senior, when she was 14-years-old at a tented outdoor skating rink on Jefferson street in Plymouth.
There was a game the skaters played, gliding to the sounds of live organ music, where at a signal, the girls would change partners.
Norma and Keith became partners forever.
On February 27, 1938, she and Keith eloped. The young lovers were married in the Methodist Parsonage in south Bend.
She called him “Dilly,” and he called her “Betz.”
The couple started married life on a rented farm south of Bourbon.
In 1952, Keith and Norma bought a grocery store in Bourbon. Called Dillingham’s Grocery, they ran it as a family with their children helping after school. In 1960, the closed the first grocery and opened a supermarket on the West side of Main Street.
Two years later, they added a fine line clothing shop on the second floor. Norma always said that Keith did that to get her out of the way of the downstairs grocery business.
She loved it. Always a fashion plate herself, she enjoyed buying and selling pretty clothes for women and children.
The Dillingham’s traveled extensively after their retirement. They spent a month in Europe, went on several cruises and drove to Mexico after Keith said that “we’d better go now: gas is soon going to be fifty cents a gallon.”
For four years, the couple lived in a condo on a golf course in Fort Myers, Fla. .
“Dilly” and Norma moved to Plymouth in January of 1987. They bought a home on Webster Avenue. Married for 63 years, Dilly died on April 13, 2001.
A member of the First United Methodist Church in Bourbon and later in Plymouth, Norma sang in the choirs. She played the organ at home for her home enjoyment.
She enjoyed playing golf and was an avid duplicate bridge player.
The Dillingham’s raised three sons: Stephen Keith, Timothy N. and Robert Lewis. Stephen died in an automobile accident in 1956: he was 17-years old.
Tim (Lorie) live in Indianapolis where he is a retired designer of kitchens or up-scale homes and Lew (Lonnie), a retired pilot for Federal Express, reside in Memphis, Tenn.
Norma moved to Miller’s Merry Manor Assisted Living complex in 2006, and was there until 2011.
While there she participated in the Community Bridge games and in the Texas Hold ‘Em poker sessions.
While in the facility she enjoyed twice weekly visits from her dog, Snuggles.
Norma is survived by two sons, Tim Dillingham of McCordsville, IN and Lew and Lonnie Dillingham of Germantown, TN. Two granddaughters, Rebecca and Jack Waldron of Westfield, IN and Leslie and Tim Van Horn of Collierville, TN, a grandson, Brad Dillingham of Joshua Tree, CA, a step-grandson Michael and Gale Fant, their children Addison, Carter and Michael James of Cordova, TN and a great-grandson, John Timothy Waldron of Westfield, IN.
She was preceded in death by her parents, her husband, and her son, Steven Keith Dillingham.
Four sisters also preceded her. They are Rose N. Taylor, Jennie N. Wells, Flossie N. Reading and Fay Neidlinger. John Neidlinger, brother, has also died.
Visitation will be on Friday, February 1, 2013, from 1 to 3 P.M. in the Johnson-Danielson Funeral Home, 1100 North Michigan Street, Plymouth.
Funeral services for Norma will follow visitation at 3 P.M. in the funeral home with the Rev. Larry Marhanka, pastor of the First United Methodist Church, presiding.
Burial next to her beloved “Dilly” will be in the New Oakhill Cemetery following the services.
Memorial gifts in Norma’s memory may be made to the Marshall County Humane Society or to the First United Methodist Church.