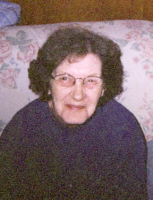 Norma Jean Clyde, 75, a lifetime Plymouth resident, died at 11:58 a.m. on Friday, October, 28, 2005, in the Saint Joseph Regional Medical Center, Plymouth. Norma died following a lengthy illness. She had lived at 11223 Hawthorn Road in Plymouth.
Born in Plymouth on January 20, 1930, she was the daughter of Roscoe and Florence Copp White. She graduated from Plymouth High School with the class of 1949.
On August 11, 1956, Norma and William R. Clyde were married in Angola, Indiana.
A homemaker, she enjoyed raising her children and grandchildren.
She enjoyed painting and hooking rugs. She was an avid collector of bells and clocks from different states in the union and loved playing Bingo and raising tropical fish. One of her favorite pastimes was going out for coffee and conversation with her sisters, Nellie Manual and Marge Zehner. She was a former member of the ladies auxiliary of the Plymouth Moose Lodge #271.
Norma is survived by her husband, William, Plymouth and by their seven children.
Her sons and daughters-in-law are: John and Debbie Wickard, Florida; Jim and Colleen Wickard and Matt and Amy Clyde, all of Argos, Ind.; and Richard Clyde of Plymouth. Her three daughters and their spouses are: Lorene McNeely, Warsaw; Theresa and Eric Deery, Plymouth and Norma and Earl Goodsell, LaPaz.
There are 14 grandchildren and 17 great-grandchildren who also survive, along with two sisters: Margaret Mishler of Plymouth and Florence Heiman of Elkhart, and three brothers: Bob White and Howard White, both of Plymouth and Don White of Florida.
Norma was preceded in death by her parents, a great-granddaughter, Amber Louise Bachtel, a brother, Leonard White and two sisters, Marjorie Zehner and Nellie Manual.
Friends will be welcomed to share memories and celebrate the life of Norma Jean Clyde, a wonderful woman, wife and grandmother, on Tuesday, November 1, 2005, from 4 to 8 p.m. in the Johnson-Danielson Funeral Home, 1100 N. Michigan St., Plymouth.
Funeral services for Norma will be held at 11 a.m. on Wednesday, November 2, 2005, in the funeral home.
Burial will be in New Oakhill Cemetery, Plymouth, Ind.
Memorial gifts in Norma’s memory may be given to the Center for Hospice and Palliative Care, Plymouth.