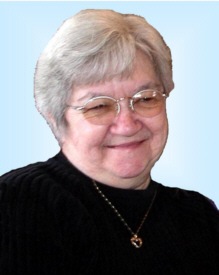 Norma Jean Daugherty, 82, a Plymouth resident since 1956, passed away in Miller’s Merry Manor, Plymouth, on Friday, May 24, 2013 following a brief illness.
Born on March 16, 1931, in Sharon, Pennsylvania, she was the daughter of Harry and Martha (Jones) Reiter.
She graduated from Sharon High School with the class of 1950, and attended accounting classes at Shenango Valley Institute, now Penn State’s Sharon campus.
In 1952, Norma met James W. Daugherty while he was stationed at the Youngstown Air Base. They were married on February 5, 1956, in Jim’s parents’ home in Plymouth.
She was a wonderful wife and home mother who knew just when to hold her ground and needed no backing up. Norma was known for her good willed yet feisty nature.
She loved the children and her work as a Library Aide at Washington Elementary School. She retired in 2000 after 26 years of service.
She was a supporter of Plymouth sports and season ticket holder for over 56 years Norma enjoyed camping with her family and was an enthusiastic sports fan of Penn State football and the Cleveland Brown and Indians. She even followed NASCAR events which may have reminded her of the days she drove in the Ferrell Pennsylvania Powder Puff Derby.
A member of Eastern Star, she was also the voice of the Marshall County Blueberry Festival making announcements. She organized the festival’s kid games for years and provided Chili for the Plymouth High School Baseball fundraiser.
Norma is survived by James, her loving spouse of 57 years and by their two sons, a daughter and six grandchildren.
Their sons are James W. (Susan) Daugherty II, and their children Wil and Hannah : J.C. (Melinda) Daugherty and their children Jarin, Marissa and Mandi: and Mary-Ann (Rodney) Back, and their child, Bailey, all of Plymouth.
Several nieces and nephews survive as well.
Norma was preceded in death by three sisters and a brother. They are: Martha Snodgrass, Aretta Rolfe, Doris Howard and Harry Jr.
Visitation will be from 4 to 8 p.m. on Tuesday, May 28, 2013, in the Johnson-Danielson Funeral Home, 1100 North Michigan St., Plymouth.
Funeral services for Norma, with Pastor Dennis Wenzel of the Immanuel Lutheran Church officiating, will be held in the funeral home on Wednesday, May 29, 2013, at 10:30 in the morning.
Interment will be in the New Oakhill Cemetery, Plymouth.
Memorial contributions may be made to the American Diabetes Association.