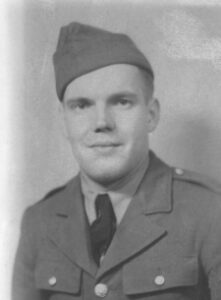 Norman “Carl” Walterhouse, 90, a lifetime Marshall County resident, died of natural causes in Pilgrim Manor at 7:15 p.m. on Monday, February 12, 2007.
Carl was a grand old soldier of World War II. He received his final marching orders and is now serving in his Lord’s Army.
Born in LaPaz, Indiana, on August 20, 1916, Carl was the son of Norman and Elsie Hazel (Guyse) Walterhouse.
Carl was truly a member of The Greatest Generation.
He attended LaPaz schools until he was 16-years-old.
In 1941 he joined the Army, and served with the 168th Infantry of the Fifth Army for almost four years, fighting battles in Algeria, Tunisia, the Po Valley and Italy. His unit was commended for over 300 days of combat. He was awarded a Bronze Star for meritorious achievement in ground combat in the European-African-Middle Eastern Theater of Operations.
His other decorations included two Purple Hearts, Bronze and Silver battle stars and an Arrowhead. After his honorable discharge, Carl came back to Plymouth and worked in the box factory for 10 years. He later worked for 20 years in the Indiana State Highway Department.
In his later years, he diligently and faithfully swept the walks for many downtown merchants.
He liked a good joke and enjoyed making the rounds to share them with the guys at the Plymouth Police Department and Uncle Doug’s Barber Shop.
He loved to shop and had an extensive collection of shirts and ties. He was known to be very giving to others and never forgot the names of his friends
In 1998, Carl was named the Honorary Blueberry Festival Parade Marshal. Former Governor Otis R. Bowen was the official parade marshal and Carl said that shaking Dr. Bowen’s hand was one of the thrills of his life.
He was a member of the Eagles Lodge, a lifetime member of the V.F.W. Post #1162, the American Legion of Bourbon and constant member of the Plymouth House of Prayer.
In 2002, in failing health, Carl went to live in the Indiana Veterans Home in West Lafayette.
He missed Plymouth and his many friends so much so, he soon returned home to Plymouth where he has made Pilgrim Manor his home since June of 2003 where he appreciated the attention and care provided by the entire staff and special friends, Kelly Wagers, Officer Gary Cleveland and brother in Christ, Larry Harner.
Carl is survived by a sister, Margaret Parcell of LaPorte, Indiana, and four nieces and ten nephews. His nieces are: Carol Singleton, Bremen: Martha Torrible, Silver Springs, Md.: June (Norm) Kelley, York, Penn.; and Pat Simpson, Mill Creek, Ind.
His nephews are: Lester Moser and Carl (Helen) Moser, all of Bremen, Ind.; Art (Carolyn) Moser, Mishawaka, Ind.: Bill (Terry) Nicholas, Mesa, Ariz.: Harold (Betty) Nicholas, Phoenix, Ariz.; John (Wanda) Nicholas, Mill Creek, Ind.; Dale Nicholas and Richard Nicholas, both of Niles, Mich.; Don Nicholas, LaPorte, Ind., and Jerry Nicholas, Denver, Colo. along with numerous great nieces and nephews.
Carl was preceded in death by a brother, Donald Walterhouse and an infant brother and by four sisters: Blanche VanVactor, Reathel Nicholas, Mildred Moser and Lois and Ruby Walterhouse.
Friends will be welcomed by his family to share memories and to celebrate Carl’s long and inspiring life on Thursday, February 15, 2007, from 3 to 7 p.m. at the Johnson-Danielson Funeral Home, 1100 N. Michigan Street, Plymouth. Where calling will continue after 7 a.m. on Friday until time of services
Funeral services will be held on Friday, February 16, 2007, at 11 a.m. in the funeral home. Services will be conducted by the Rev. James Campbell.
Interment will be in Oakhill Cemetery, Plymouth where Military Honors will be provided by members of the V.F.W. Post 1162 and American Legion Post 27.
Memorial gifts in Walter’s memory may be given to the Marshall County Museum, 123 N. Michigan St., Plymouth, IN 46563.