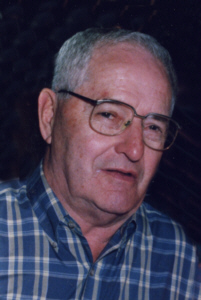 Norman L. Klinedinst, 83, formerly of the Swan Lake area in Tyner, passed away on Wednesday morning, October 1st, in his home.
Born in his family home in Tyner, Indiana, Norm was the son of Ira and Vera Catherine (Powell) Klinedinst. He graduated from Tyner High School with the class of 1949, being a Tyner star as he played basketball and softball during high school.
On January 15, 1950, Norm married Eileen June Stoneburner at their home in Tyner. To this union three girls were born: Sharon, Vicki and Laurie.
Norm worked for Air Products in South Bend as a truck driver for 25 years and then as a filler operator in the plant for five years. He retired in 1993.
He was a member of the Tyner Odd Fellows Lodge No. 821, the Plymouth Moose Lodge No. 741 and attended Tyner United Methodist Church with his wife. With a dry sense of humor, Norm was quite the character and cherished time with his children and grandchildren. He enjoyed dancing and the company of a card club for over 35 years. Fishing was his passion and was known to out fish the likes of anyone. Special times were experienced by family and friends on annual camping trips to Bear Track Lake in Wisconsin.
Norm is survived by his wife of 64 years, Eileen of Plymouth and his daughters: Sharon Sue (James) Xaver, Vicki Lynn (William) Norris, and Laurie Ann (Earl “Butch”) Nelson, all of Plymouth. Also surviving are seven grandchildren; Billie Norris, Jena (Chad) Dreibelbis, Kristopher (Megan) Norris, Tami (Chad Yoder) Woodward, Fred Woodward, Jennifer Orr and Jacqualine Nelson. Thirteen great-grandchildren and one great-great grandson also survive.
He was preceded in death by his parents, his brother Eugene, and his grandson, Ryan Leigh Woodward.
Family and friends will gather at the Johnson-Danielson Funeral Home, 1100 N. Michigan St. Plymouth on Friday, October 3rd, from 3 – 8 p.m. Members of the Tyner I.O.O.F. will provide a memorial rite in the funeral home at 7:30 p.m. Friday.
Funeral services will take place in the funeral home at 11 a.m. on Saturday, October 4th, with Rev. Tamara Boggs officiating.
Burial will follow in the Tyner Cemetery.
Memorial gifts may be made in his name to the Center for Hospice Care 112 S. Center St. Plymouth IN 46563 or Tyner United Methodist Church, 4501 French St, Plymouth, IN 46563.