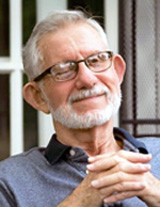 Unexpectedly, yet in peace, Norris Luton Hickerson, 82, passed from this life on Friday afternoon of natural causes in South Bend, Indiana.
Formerly of Nashville, Tennessee, Norris resided in Hong Kong, Vietnam, and most recently, the United Kingdom. He was School body President of East Nashville High School, Class of 1953. Norris completed his undergraduate degree at Vanderbilt University in 1957, his masterâ€™s degree in 1961 from University of Illinois and doctorate from Columbia University in 1966. He was a talented civil engineer having designed bridges during the advancement of the Interstate Highway System. Norris was also a respected Professor at Tennessee Tech from 1966-1973, and at Hong Kong Polytechnic from 1973 to 1987.
He is survived by his wife Barbara L. (McGlawn) Hickerson, and four children: Norris Allen (Minda) Hickerson, David Alexander (Caroline) Hickerson, Sarah Elizabeth (John) Hickerson Oliver and E. Andrew (Emma) Hickerson. The family includes eight grandchildren and one deceased grandson. Also predeceased are his parents; Norris Henry and Tennie Rebecca (Luton) Hickerson and sister Elise Saad.
A memorial service is being planned at a later date. Interment will be with family in the Dickson Cemetery, Dickson, Tennessee.
Condolences and memories recalled may be emailed to the family at hickerson1912@sky.com.