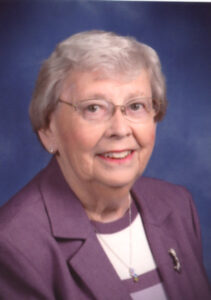 Nova May Shilt, 83, passed away unexpectedly at her home of natural causes on Thursday, October 24th.
Nova was born on August 17, 1930 in St. Louis, Missouri, the daughter of Hugh M. and Esther (French) Cobb. The family moved to Wells County, Indiana and she graduated valedictorian of her class from Petroleum High School. She then attended North Central College in Naperville, Illinois where she met another education student by the name of Raymond W. Shilt. Together they graduated with teaching degrees and on June 21, 1952 they married in Wells County. They did everything together over the next 53 years including taking their first teaching positions at the Three Oaks Michigan High School with classrooms next to each other. They then moved to Beverly, Kentucky and became dorm parents and teachers at Red Bird Mission for 10 years. After moving to Plymouth in 1966, Nova taught briefly at LaVille High School during which time she earned her Masters Degree in Education from St. Francis College in Ft. Wayne, IN.
She was first a mother and homemaker for their two children Jean and Kenneth but continued working doing accounting for Skystream Inc. in Plymouth and Pilgrim Farms. In the mid-70’s she returned to teaching at John Glenn High School and taught Government and Economics until 1986. Nova simply loved being on the go and spent the next 20 years as a familiar face in Dan Schmelter’s office of Edward Jones.
Nova loved Plymouth sporting events where she and Ray were sighted as faithful fans only separated at basketball games where Ray served at the scorer’s desk with Nova two rows behind. Even after Ray’s passing on September 25, 2005, Nova maintained her familiar seat and if the weather was bad she was fixed to AM 1050 and never missing a ‘Coaches Corner’. She also intently followed her grandchildren’s events and that of the Chicago White Sox and Bears.
She was just as dedicated to her church, Trinity United Methodist. As a longtime member she served on various committees, taught Sunday School and sang in the choir.
Nova enjoyed time spent with friends like trips to the Wagon Wheel Playhouse. She herself was known for portraying a character she named “Maggie” performing programs that crossed generations.
She is survived by her dear family members: daughter, Jean M. and spouse Charles K. Hoover of Noblesville and their children and families: Kevin (Leah) Hoover of Noblesville with children, Grace and Rosalie. Joseph (Ashley) Hoover of Hershey, PA, with children, Owen and Myra. Benjamin (Kaitlyn) Hoover of Noblesville with their child Nova. Son, Kenneth R. and spouse Sharon S. Shilt of LaPorte, IN with son Nathan Shilt of Michigan City, IN and great-great grandson Caleb. Nova was also preceded in death by one sister, Ruth E. Cobb.
Visitation will be held on Sunday, October 27th from 2 – 5 p.m. in the Johnson-Danielson Funeral Home, 1100 N. Michigan St. Plymouth.
Services will be held on Monday, October 28th at 11 a.m. in the Trinity United Methodist Church, 425 S. Michigan St. Plymouth. Pastor Mark Need will officiate. Visitation will continue at the church after 10 a.m. until time of service.
Burial will follow in the New Oakhill Cemetery, Plymouth.
Memorial gifts may be made to the Trinity United Methodist Church or The Red Bird Mission, 15420 Kentucky 66, Beverly, KY 40913.