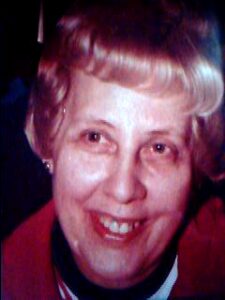 Olga Catherine Wagner, 82, affectionately known as “Oggie,” died of natural causes at the home of her daughter and son-in-law, Judy & J.R. Burger, 18120 10B Road, Plymouth. at 11:35 a.m. on Wednesday, November 9, 2005. Olga had lived with the Burgers for the past two years. A lifetime Fort Wayne resident, she was 82 years old.
Born in Fort Wayne on February 27, 1923, Olga was the daughter of Edgar M. and Pearl Leo (Ellis) Miller.
She attended St. Patrick’s Elementary and high school in Ft. Wayne.
In April of 1940, in Paulding, Ohio, Olga married Jullian E. Watkins, now deceased. She was then married to Carl W. Wagner, who died in September of 1985.
For 25 years, Olga managed the bar room of Margo’s Den at both of their locations in Fort Wayne.
She enjoyed bowling and played on several women’s leagues in the 1970s.
A fisherwoman, she loved to fish and always made the first catch of the day.
She was a member of the Precious Blood Roman Catholic Church in Fort Wayne and, since moving to Plymouth, had attended St. Michael’s Church.
Olga is survived by two children and five grandchildren.
Her daughter and son-in-law are Judith A. and James “J.R.” Burger, Plymouth and her son is Robert L. Watkins, Fort Wayne.
Two sisters; Garda Manuilow, Fort Wayne and Euline Obermiller, Prescott Valley, Ariz. also survive.
Olga was preceded in death by a son, Michael Jullian Watkins in 1993, five sisters: Joyce Harless, Sally Hankee, Lois Yoquelet, Jacqueline McBride, an infant and five brothers: Darwin Cobb, Harley Cobb, Denzil Cobb, Frank Miller and Edgar Michael Miller Jr.
Friends will be welcomed to celebrate Olga’s life on Sat. November 12, 2005 from 10 a.m. to 11 a.m. in St. Michael’s Catholic Church, 615 N. Center St. Plymouth. A Rosary will be said at 9:45 a.m. in the Church. A Funeral Liturgy will begin at 11 a.m., with Rev. Father William Kummer.
A committal rite and internment of ashes will be held at 11 a.m. on Monday, November 14, 2005, in the Greenlawn Memorial Chapel, Covington Rd., Fort Wayne, Ind. Father Kummer, Plymouth, will officiate.
Memorial gifts in Olga’s name may be made to St. Michael’s Parish.