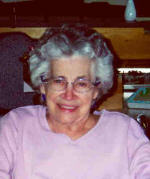 Olive Joan Amones, 87, went to be with the Lord at 3:30 p.m. on Sunday, May 19, 2002 , at the Pilgrim Manor Nursing Home in Plymouth , where she was graciously cared for the past three years. She was born on June 2, 1914 , in Walkerton , Indiana ; to Tony C. and Delphia (Bradford) South. Olive lived most of her life in Plymouth and was raised in the Walnut Street home which remains in the family today. She graduated from Plymouth ’s Lincoln High School in the year of 1932. Olive was married to Gerald ‘Jerry’ Amones on the 31st of December, 1933 , at the First Christian Church in Plymouth , and was a supporting member. She enjoyed working for many years with the Child Evangelism Fellowship (CEF) program for children and had attended the Faith Baptist Church at 13th and Peach Roads. A local business woman, she owned and managed the Plymouth Credit Bureau for over 20 years, until selling the business and retiring in 1983. She enjoyed times with her family; croqueting and crafts. She had collected thimbles, clowns and bells through the years, having an appreciation for antique toys. Olive and Jerry raised their family of two daughters and one son at their home on Dixon Lake . Jerry died in February of 1977. Her daughters are; Joan Smith of Liberty , North Carolina and her husband Douglas and Ruth E. Doll of Plymouth , Indiana and her husband Peter J. ‘Jim’ Doll Jr. A son John Amones and his wife Chris, make their home in Sturgis , Michigan . Olive was blessed with 10 grandchildren and 15 great grandchildren. A sister, Marcy Bowen of LaPorte , Indiana also survives. Proceeding Olive in death were her parents, spouse and three brothers; Claude, Cecil and Jim South. Visitation will be Tuesday, May 21, 2002 from 5 – 8 p.m. in the Johnson-Danielson Funeral Home, 1100 N. Michigan St. Plymouth . Services will be held in the funeral home on Wed., May 22, 2002 at 2:30 p.m. the Dr. Paul Loder of the Faith Baptist Church , Plymouth will officiate. Burial will follow in New Oakhill Cemetery , Plymouth . Memorial contributions in Olive’s memory may be made to the Faith Baptist Church , Missionary Fund.