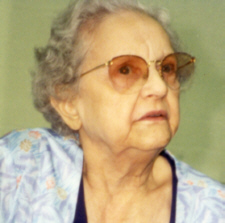 Opal Eloise Jones, 98, formerly of Plymouth, passed away of natural causes at 6:32 p.m. on Wednesday, April 24, 2013. Opal was a resident of the Lakeland Rehabilitation and Healthcare Center of Milford, IN. for the past two years.
Born on February 16, 1915, in Hepton, Kosciusko County, she was the daughter of Edward Clinton and Cora (Miller) Conrad.
She graduated from Nappanee High School with the class of 1933.
In August of 1967, Opal and Orville Jones were married. Orville died in 1973.
A talented seamstress, Opal work in the Glove Factory in Plymouth and at Hart-Schaffner-Marx, Rochester. She later worked at Menser Industries of Plymouth and retired from there in 1977.
Interested in many crafts she enjoyed sharing her talents with nursing home residents as an activity. She also sewed clothes for her family members.
Opal is survived by a sister-in-law, Darlene Conrad, several nieces and nephews, all of whom were like her own children. They are: Gail Albright, Loveland, Ohio: George and Debra White, Etna Green, IN., Joe and Cathy White, Bourbon, IN., Ginger Ros, Muncie, IN., DeVon Conrad, WI., Lyle Conrad and Jackie Conrad, MN.
Several great and great-great nieces and nephews survive as well.
Opal was preceded in death by her parents, two sisters; Julia White and Thelma Conrad and three brothers: Lowell, Dale and Russell Conrad, and a nephew Lotus Conrad.
Visitation will be from 1 to 3 pm on Sunday, April 28, 2013, at the Johnson-Danielson Funeral Home, 1100 North Michigan Street, Plymouth. Funeral services for Opal will follow visitation in the funeral home at 3 pm with the Rev. Jean Sparks, pastor of the First Presbyterian Church where Opal was a member, will officiate.
Interment will be in the Hepton Cemetery, located near Nappanee, IN. Memorials may be made to the First Presbyterian Church, 401 N. Walnut St., Plymouth, IN 46563.