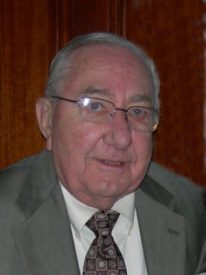 Orion F. (â€œBuddâ€) Treat, Jr., 85, passed away peacefully at home on August 8th, 2016, with his wife of 63 years, Ajean, and son, Gary, by his side. Budd was born in Pittsfield, Massachusetts, on December 19, 1930, to Virginia (Miller) Treat, originally from Plymouth, and Orion F. Treat, Sr. The family moved back to Plymouth when Budd was 10 years old to be closer to grandparents Welcome and Clara Miller. He later graduated from Lincoln High School (Plymouth) in 1949 and graduated from International Business College in Fort Wayne, Indiana, with a degree in Accounting. In addition, he was also a graduate of the Culver Military Academy Summer Naval School in 1949 where he later returned to teach in the naval program.
After graduation, he moved to Chicago to take a sales job at Swift and Company. He later met Ajean at a social mixer at the LaSalle Hotel. The couple married on April 18, 1953, at St. Rita Catholic Church in Chicago. Budd took time out of his business career to serve his country. In 1951, he enlisted in the United States Navy. He served as the Captain’s Yeoman on the USS Des Moines whose mission was to patrol the Mediterranean in support of U.S. allies in the region. After military service, Budd worked as a sales representative for Yardley Bath Products. He started in Chicago, IL, where son Jim was born in 1955, was promoted to Omaha, Nebraska, where son Gary was born in 1958, and then promoted to St. Louis, Missouri, where son Tom was born in 1962. In 1965 with another move and promotion pending, Budd made the choice to leave a successful career, relocated the family to his hometown of Plymouth and pursued his dream of owning his own business. In 1966, he opened Treatâ€™s Squire Shop, a full-line menâ€™s clothing store. The business flourished over the years where, after more than 50 years, it remains an anchor of downtown, owned and operated by son Gary. Budd opened an additional menâ€™s store in Columbia City, Indiana, in 1970, and then added a women’s clothing store in Plymouth, Treatâ€™s For Her, in 1971.
Budd was active in various community, fraternal, and civic organizations. He was a member of the American Legion, Masonic Lodge, Scottish Rite, Mizpah Shrine, Loyal Order of the Moose, and Rotary International. In 1972, he was appointed to the Marshall County Sheriff’s Merit Board (hiring, promotions, and oversight for local law enforcement) and served as secretary until 2015 when his son Gary was appointed as his replacement. In 2012, he and wife Ajean were honored at the St. Joseph Hospitalâ€™s annual gala with the Community Spirit Award. The award is given each year to the Marshall County resident who exemplifies the spirit of St. Joseph Medical Center which is passionate giving, enthusiastic service, and compassionate care. Over his lifetime, Budd had many hobbies and interests including hunting, fishing, boating, golf, cards, and collecting Civil War books and memorabilia. He traveled to all 50 states and various foreign countries. He enjoyed spending summers at the family cottage on Pretty Lake and was a longtime member of Plymouth Country Club. He is survived by his wife, Ajean (Tornello) Treat, sons Jim Treat (wife Linda) of Noblesville, Indiana, Gary Treat (Jeannie Levitt) of Plymouth, Indiana, and Tom Treat (Wayne Smalley) of Chicago, IL, sister Sally (Treat) Clarke of Plymouth, and beloved grandchildren Dr. Tim (wife Kayla) Treat of Indianapolis, Emily (husband Nathan) Fox, of Indianapolis, and Michael Treat of Pittsburg, Pennsylvania.
He was preceded in death by his mother, Virginia, father, Orion, and infant grandson Kevin Daniel Treat. Visitation will be held from 4-7 p.m. on Thursday August 11, 2016 at the Johnson-Danielson Funeral Home, 1100 N. Michigan Street, Plymouth.
Funeral services will be held at 11:30 a.m. on Friday August 12th in the funeral home with Fr. William Kummer officiating. A luncheon will follow for family and friends to celebrate Buddâ€™s life at Christoâ€™s Banquet Center beginning at 12:30 p.m. A private family burial will be held in the Oak Hill Cemetery. Preferred memorial contributions can be made to Center for Hospice Care 112 S. Center St., Plymouth, IN 46563 or to the charity of choice.